So I am looking through the New York Public Library and their new way of viewing on line.  The clarity is a little better.  However, looking around, I found a picture of a house that is listed as being on 110th Street and Riverside but really it is a house that was on 108th and Riverside. 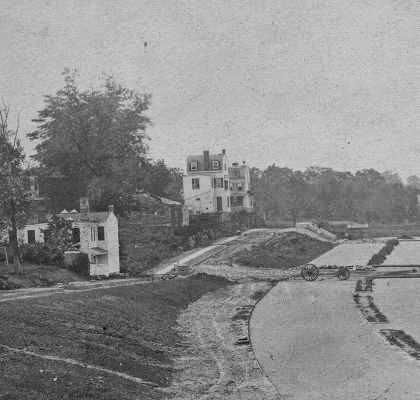 This is looking south on September 30th 1870 from 109th Street.  Obviously much has changed but there is so much that is recognizable today.  None of the houses are with us but the shape of the island of greenery (the tangled mess of bushes and trees) between the service road, merely a suggestion at this point, and the main drive is starting to look familiar.   The service road does not exist on the 1867 maps and neither do these houses.  There are houses that unfortunately do not appear in this photo but do appear, along with their drive ways, on the 1867 map.  The hill leading down from 106th street to the intersection of the service road and 108th street where the shortest timed traffic light on the west side is placed is already evident.  Where the wagon with the big wheel in the middle of the drive is sitting is 108th street.  In such a short period of time, massive change will happen.  The white house on the left is on the north corner of 108th street and Riverside Drive.  How much longer will it be there?  It will be gone in less than 17 years. 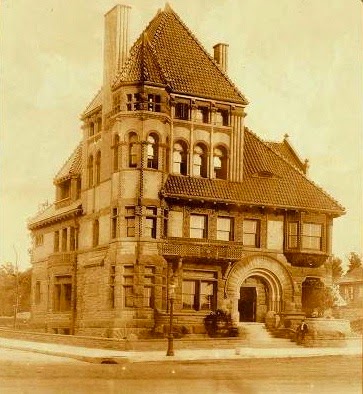 This is 108th street and Riverside Drive in 1921 while the Drive was at the end of it's second incarnation.  The is house is part of the second wave, or incarnation of Riverside Drive.  I believe that we are in the third incarnation at this point.  It was hoped that the Drive would rival Fifth Avenue and would become a thoroughfare of suburban type villas for the wealthy.  Although the construction of many large private unattached homes, ranging from houses such as this one to the largest private house ever built on this rock (The Schwab Mansion of 1906 at 73rd street and Riverside Drive), single family homes gave way to apartment house construction in the first few decades of the twentieth century.

Built in 1892 for Samuel Gamble Bayne (1844- 1924 ), the son of a prosperous merchant in the town Ramelton, Ireland.  At the age of  twenty-five Sam graduated from Queen's University Belfast and decided to travel to America.  While he was here Samuel G. Bayne accumulated enough wealth to join the billionaires club.  His wealth was based on gold prospecting in California, oil in Texas and banking; he was a founder of Seaboard National Bank, which ultimately after several mergers and acquisitions became what we all know and love today - Chase Manhattan Bank (now JP Morgan Chase).  Could that be the nearly 80 year old Bayne sitting on the steps?


Bayne was involved in keeping the area around his home as elegant as possible and bought the vacant lots on 107th Street and 108th Street. Andrew Carnegie would do something similar on 5th Avenue, to control who his neighbors would be.
When Bayne sold the Riverside Drive lots near his house in 1899, restrictions were put into the sales agreement controlling not so much the neighbors, but how the the lots would be developed. Only “high class residences” with no more than two detached homes were to be built on the lots and that there be at least 30 feet between the houses in the middle of the block and those on either corner.  What is with us today is a result of these stipulations, the distances between 355 Riverside, 353 and 352 Riverside and 351 Riverside (the Schinasi Mansion) are 30 feet and they allow sun to get into the usually dark sides of houses too close together. 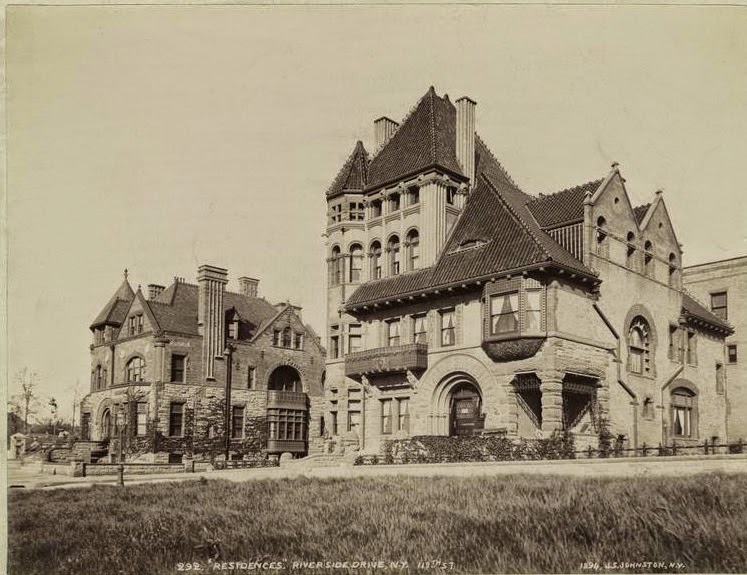 This photo, looking north / uptown dates from 1894 and was taken by J.S. Johnston.  It is labeled, not by the Library but but by the photographer as being on 110th street.  I always had doubts about the location, and the house looked too familiar to the Bayne House.  A little more comparison and a closer look with the zoom, a street lamp and the indications of a street appeared to me.  This is clearly not 110th street as it is no way wide enough.  What is great about this picture is that we can see the house that was to be the second structure on the north east corner of 108th and Riverside the second (?) 360 Riverside Drive.
Both houses were built by Bayne and designed by Frank Freeman.  355 Riverside was a larger house and Bayne had an ever growing family.  He sold 360 Riverside Drive and moved to 355 Riverside by 1892.


When 362 went up a spite wall was built on the north end of the lot of 360 Riverside, blocking the views of the side garden and the river looking south.  Cora B. and John A. Rutherford were the owners of 360 Riverside when 362 Riverside went up.  Cora was the descendent of Henry Spingler Fonerden Davis who had purchased the house from Samuel Bayne.  She had found it too insulting to live next to an apartment building.  She eventually sold the house and lot in 1917 to the Paterno Brothers who, with their favorite architect, Gaetan Ajello and built the current 360 Riverside Drive, known as The Rutherford.  No mention of Bayne, a man who left a mark on this neighborhood, in a good way, anywhere . . . I'm just saying  . . .
Posted by New York Tours By Gary at 12:22 PM