By the late 18th century, after the revolution and naming and renaming streets and places had begun, the area on this rock north of the village of Manhattanville all the way to the top of the island was called Mount Washington. It was the popular name anyway as it was also very patriotic; after all George Washington did have 1 of his 9 major battles in the area.
In 1921 the New York Tribune sent a reporter uptown to explore the rapidly developing hills of northern Manhattan and Washington Heights.   At the time of her quest the area that was once the home of some of the wealthiest New Yorkers, that last bit of rural Manhattan was being swallowed up and absorbed into the city. The reporter, Eleanor Booth Simmons, went alone without a photographer.  Even though there was much in the way of change happening there still was enough of the old to write about and she gives us quite a document of  the still standing homes of once rich and powerful families including Nathan Straus, James Mcreery and C.K.G. Billings, to name a few. 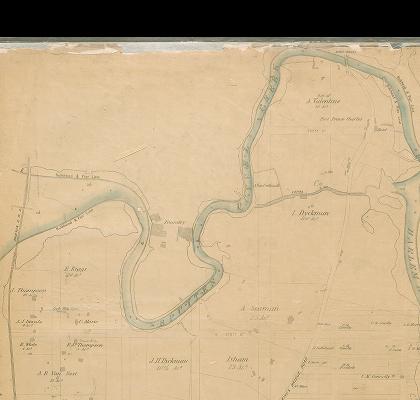 This is from the 1867 map showing the north tip of Manhattan prior to the Harlem River Ship Canal cutting through and adding more acreage to the Bronx.  The Harlem River flowed into a marsh and creek,  then the Spuyten  Duyvil Creek,  .
As time marched on the upper section of the area close to the Hudson River became known as Tubby Hook, a name still used by a soon to be no longer dilapidated marina called the Tubby Hook Marina.  But who was "Tubby" and why is there a hook named after him?  The common theory behind the name lies with Dutch Sailors who, as they went up the Hudson called every point of land that stuck out into the river a "hook".  Perhaps they saw in what was the bay of the Spuyten Duyvil creek a resemblance to a tub, with the steep wooded hills for sides. The actual hook is gone and so is the creek. The hook was just a bit north of the foot of Dyckman Street, but with all the land fill, the hook is now just part of Inwood Fields Park. 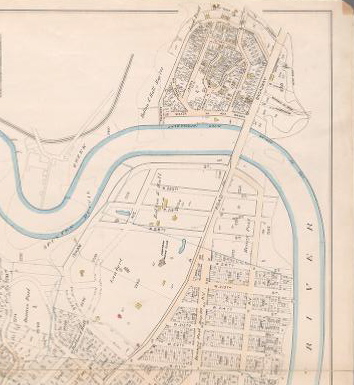 This is the same area but in 1897. The Harlem River Ship Canal has been cut through and a piece of Manhattan became part of the Bronx. Although still considered part of Manhattan by zip code and area code, the neighborhood of Marble hill looks like it is part of mainland United States.  It also looks like wishful thinking to me, but there I go again being very boro-centric   The path of the Spuyten Duyvil Creek that went around Marble Hill, making it a part of Manhattan Island and not part of the Bronx (or mainland United States), was filled in.  The canal was widened along with what was left of the Spuyten Duyvil Creek. 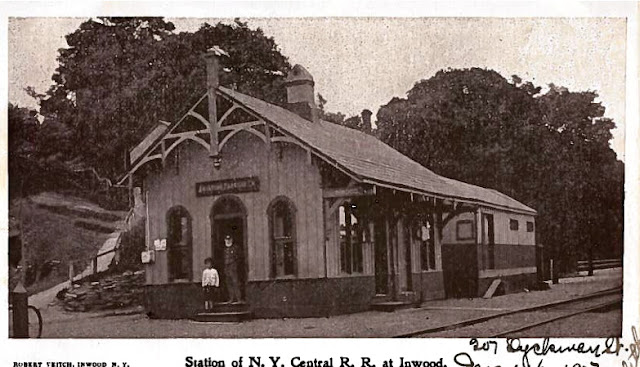 "Commodore" Cornelius Vanderbilt was told he was crazy to invest in a railroad so far over on the west side of Manhattan. No one will use it he was told.  "Build it and they will come" and by 1851 the railroad went all the way to Albany.  Build a station and they will come is more  like it.  This the Inwood or Tubby Hook Station of the old Hudson River Rail Road.  Once Vanderbilt consolidated his railroads into the uber railroad the New York Central, passenger service began to bypass the old passenger stations of the Hudson River Rail Road.  The 1921 article points out that the  "Old inhabitants say it was the policy of the New York Central that left Tubby Hook, as Inwood used to be called, in a forgotten pocket between two rivers, unpeopling the beautiful houses and abandoning them to ghosts". In 1871, with the opening of the first Grand Central Station, Vanderbilt connected the tracks of his Harlem River Rail Road with the tracks of the Hudson Line by building the Spuyten Duyvil - Port Morris Railroad so that trains leaving Grand Central could have easy access to the Hudson River Line.  The old Hudson River Rail Road was used more and more for freight only. By the late 19th century only one or two slow locals served the passengers along this line and after the subway opened up there in 1905 the line was truly redundant. Not till 1900 did the first trolley cars run to Kingsbridge, and it was five years later when the subway was extended to Dyckman Street. For a good many years this most attractive part of Manhattan Island was rather inaccessible, except for the men who could afford their horses. 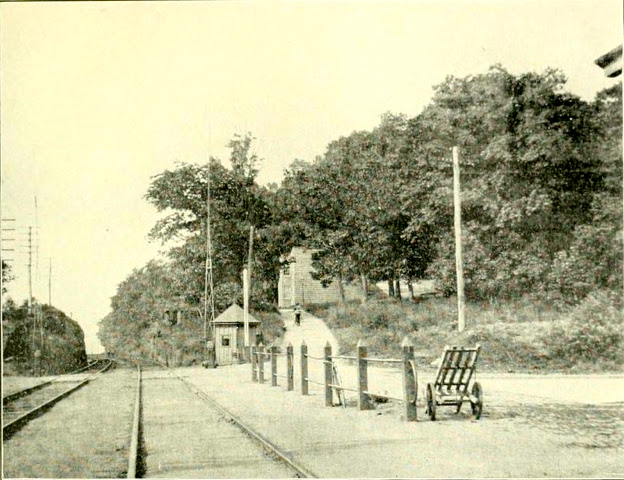 The postcard above correctly states that this is the Inwood Station of the N.Y. Central as this is after  the Commodore consolidated his railroads.  The Hudson River Railroad Station at Inwood, was also known as Tubby's Hook.  In the above picture Dyckman Street is the street crossing the tracks, coming from the right and ending at the shore of the Hudson River which would be on the left.  The road coming down the hill is River Road, later known as Bolton Road. 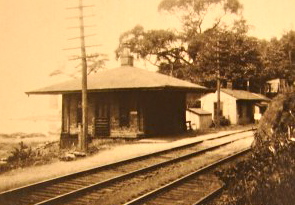 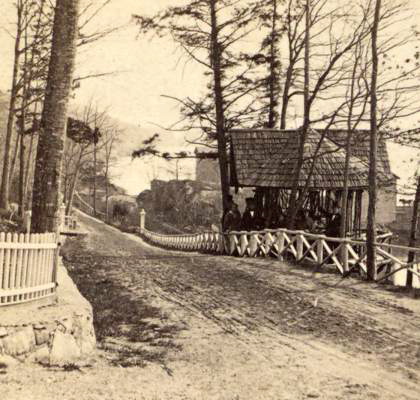 This is River Road / Bolton Road looking south towards the train station and the river. What all those guys are doing in that veranda is a mystery. 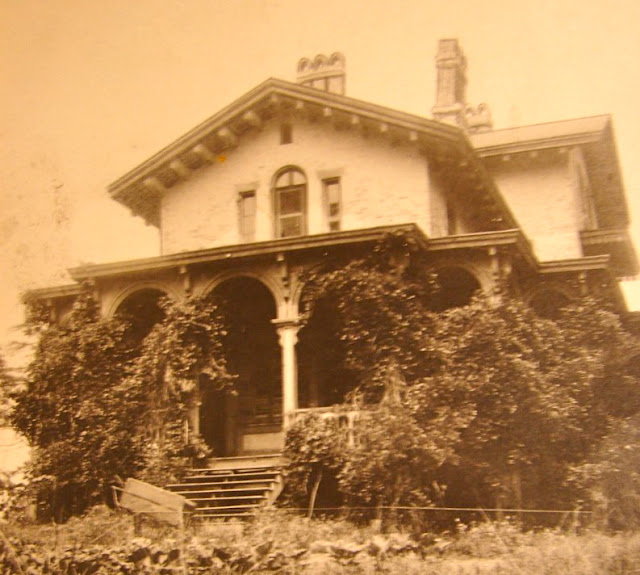 Way before the Titanic took them, way before they moved downtown to The Bloomingdale area, this was the home of Isidore and Ida Straus.  Even with the over grown foliage of a front yard gone wild, one could tell that the home of Straus Family home must have been a swell place in its prime.  However, by the time the Herald reporter made her trip to the area the house was in, as she put it, "a melancholy state of dilapidation".  At the time the article was published, a policeman was living in it, and according to the article very happy to be there. "He is a fresh air enthusiast" the article went on, so much so that "he parked his two infant sons day and night for many months on the roof of the wide veranda". This is what attracted the Straus family to living way up in Tubby Hook as they too were fresh air enthusiasts.  Isidore and Ida Straus were what we would now call "health nuts".  However, rural splendor would eventually lose out to Ida's feeling cut off. This was not an especially easy area to get to. 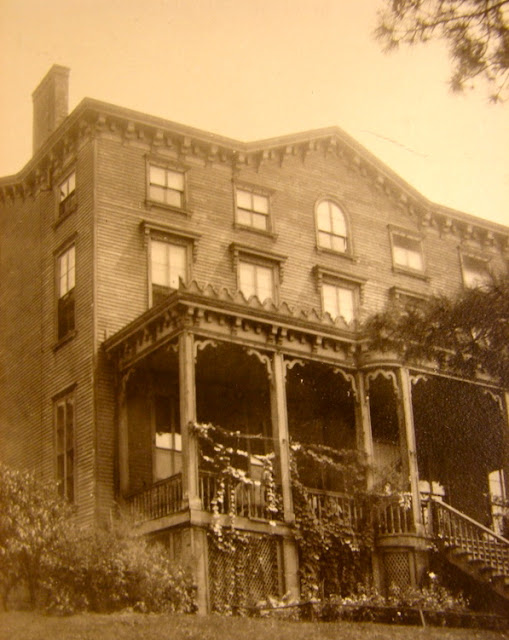 This is the McCreery house, photographed in 1921. James McCreery was a successful dry goods dealer.  So successful that he opened a behemoth department store on Broadway at 11th street (the building is still there - even after a bad fire in 1971 - as apartments).
To reach the McCreery house one had to take Dyckman Street to the end and then take  a narrow path to River Road, a road that no longer exists. Walk north, past overgrown terraces and box hedges, and quaint houses with cupolas and pillars, with the river and the railroad tracks below.  At the end of this narrow path, maybe wide enough for one car to negotiate it  stood the house of James McCreery. At the end of what appears to be the path described there was a 20 acre estate owned by an E. Riggs. This site had a wooden house on it and would have western and northern views of the river (in addition to south and east) Basically where the tollbooths are now for the Henry Hudson Bridge. It is was not considered a beautiful building by the author of the article, calling it  "high and square shouldered, it looks like a boarding house. But it commands a splendid view, and it has a generous air, as if it had tales to tell of the hospitality that once made it a social center." 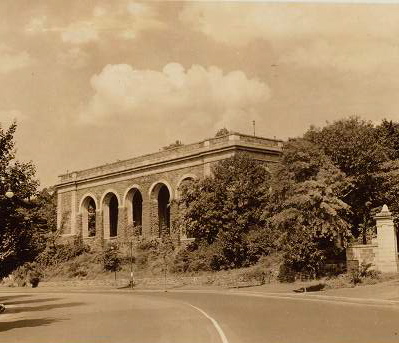 Recognize this? If you take the north bound Henry Hudson past the George Washington Bridge on a stretch that was once Riverside Drive you have passed it. Constructed of Manhattan Schist quarried on site, this great arched stone gallery was the extravagant entry to the estate of Cornelius Kingsley Garrison Billings, a wealthy industrialist, noted eccentric and avid horseman.
Billings father was a major stockholder in the Peoples Gas Light and Coke Company.  After college he joined this firm, that provided a lion's share of the gas for lighting to Chicago, eventually inheriting controlling interest in the company and, at the age of 40, retired from business to devote his time to his true love: the growing stable of horses he owned.  In fact, he moved to New York and purchased acreage in this undeveloped area of uptown because of the recent opening of the Harlem River Speedway which ran from 155th street to Dyckman Street, where the elite would meet to compete, with their horses. 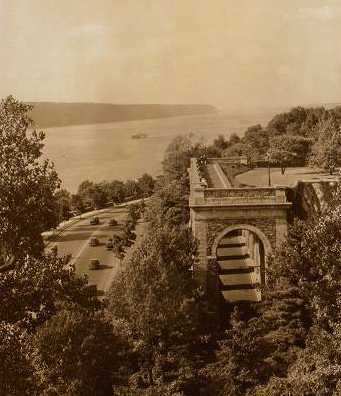 Another view of the driveway. 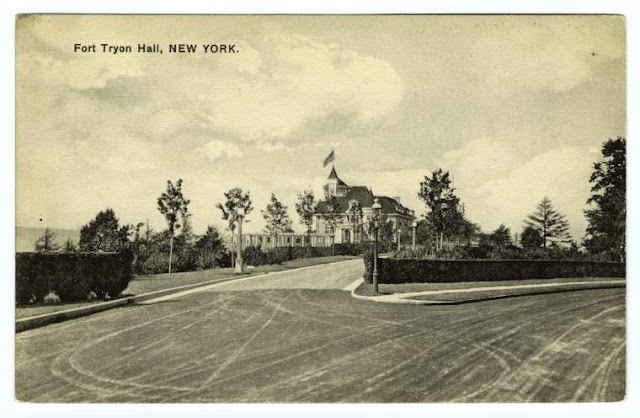 Like the postcard says, it was called Fort Tryon Hall. The "Hall" cost was $2,000,000 and stood on Manhattan's highest point, 250 feet above sea level, with 20-mile views of the Hudson Valley. His 25-acre  estate encompassed formal gardens, a 126-foot-long bathhouse for the  75-foot indoor marble swimming pool, and a yacht landing on the Hudson at Dyckman Street. There he had his 232-foot yacht, Vanadis.
The road to the right is Margret Corbin Drive, the first woman to be wounded in battle during the American Revolution.  "Captain Molly" as she became to be known, was from Kentucky and had followed her husband north.  At the Battle of Washington Heights, November 16th 1776, "Captain Molly" took over her husband's cannon when he fell mortally wounded.  The actual Fort Washington was further south between what is now 183rd and 185th streets.   "Captain Molly" was severely wounded herself but recovered and after the war served as a domestic and cook.  Always addressed as "Captain" she was reportedly "tart of tongue and sloppy in dress".  She died in 1800 in Highland Falls New York.  In 1926 the Daughters of the American Revolution had her remains moved to the Post Cemetery at West Point, one of the few women and maybe only one of two civilians to be interred there. 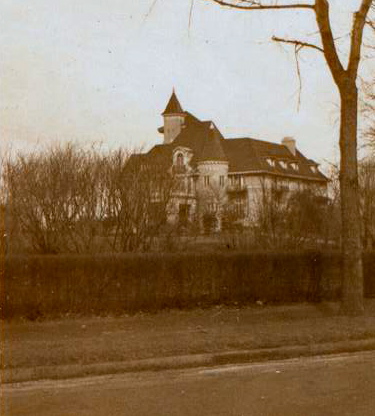 Originally from Chicago, in 1907, Billings, his wife, two children and 23 servants moved to a new residence described at the time as "In the style of Louis XIV", the house had several large towers, a Mansard roof along with the previously mentioned swimming pool, squash courts and maple lined bowling alleys. 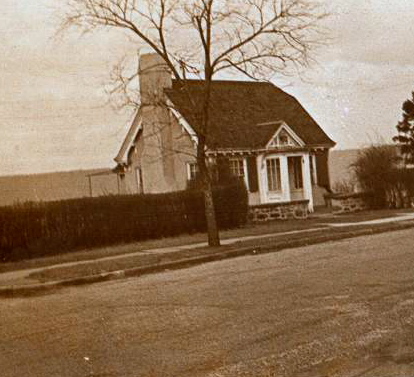 This is the Gate keepers house at the end of Fort Washington Avenue.  The gate was for Fort Tryon Hall.  This little house was built in 1908, a year after the big house was completed.  The gate house is till there, right at the entrance to the Heather Garden. The house serves as the office for the park administrator of Fort Tryon Park.
Billings and his family moved out. By 1916 he wanted to move on, not for any financial reason, he just wanted a change. He sold his 25 acre estate to John D. Rockefeller Jr. for $875,000. This sale began what we all know and love today, Fort Tryon Park. Unfortunatly Fort Tryon Hall is gone, it burned down in 1926 after being spared the wrecker's ball.  Preservationists protested the destruction of the house and the city turned down John D. Rockefeller Jr's offer of a new park; the city knew he wanted to have some streets closed on the East Side for his Rockefeller University (but this is another story) so the quid pro quo situation would have to wait, as would the park and the house was saved for a while.  This practically a chateau house only lasted 19 years but his 232-foot yacht, Vanadis, still exists. It is now anchored at Riddarholmen in Stockholm.  It is being used as a hotel known as Mälardrottningen.