New York Tours By Gary: Elm Park, Elmwood, the Apthorpe Estate or as it is...

New York Tours By Gary: Elm Park, Elmwood, the Apthorpe Estate or as it is...: This is looking north east from 100th street between Amsterdam and Columbus Avenues. The Ninth Avenue el looms over what is now called Col...
Posted by New York Tours By Gary at 9:22 PM No comments:

Elm Park, Elmwood, the Apthorpe Estate or as it is known now 91rst and Columbus Avenue. 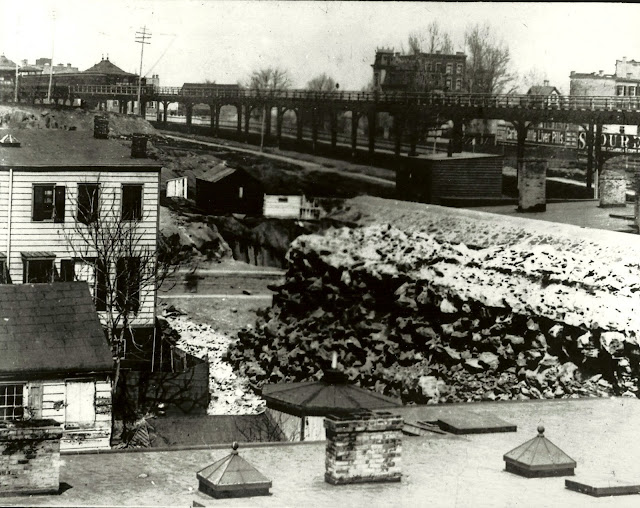 This is looking north east from 100th street between Amsterdam and Columbus Avenues. The Ninth Avenue el looms over what is now called Columbus Avenue and the peaked roof of the 104th street station is clearly visible in upper left hand corner.
The large pile of rocks and stones in the lower right foreground is the remains of the original Croton Aqueduct of 1842. The aqueduct ran above ground and eventually to a receiving reservoir located between 86th and 79th streets and between 6th and 7th avenue. This area is now within Central Park and is the site of the Great Lawn. From there the water flowed through pipes to the distribution reservoir located between 41rst and 42nd streets, between 5th and 6th Avenues. The site is now occupied by the main branch of New York Public Library.
Eventually the above ground aqueduct was placed underground and the structure you see in the photo was rendered obsolete. The aqueduct was a hinderance to traffic flow on too many streets, and as soon as the aqueduct was no longer used, where it blocked a street it was knocked down. In many cases the stones were used in construction of other structures. Saint Paul the Apostle on 60th and 9th Avenue used a good deal of aqueduct chunks in it's construction. 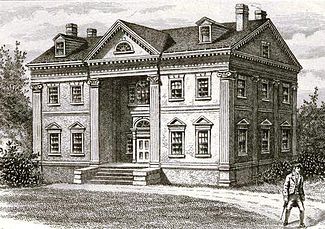 This is an image of the the mansion built by successful merchant, loyalist and member of the Governors council (until 1783 when the British surrendered the colonies) Charles Apthorpe. The house, which was finally finished in 1764, was the center piece of a 268 acre estate called Elmwood. The house sat on a rise in the property so as to afford a view of the mighty Hudson River. 153 of the acres had been purchased from Oliver DeLancey (the street was named for his father Stephen who's property was once centered down there) who had a large piece of property that included a house on what is now 86th street and Riverside Drive. The house pictured stood at what became 91rst street between Amsterdam and Columbus Avenues. 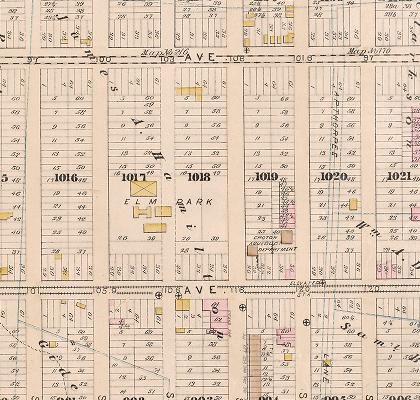 This is a late 19th century map indicating that the structures of, or what is left of, Elmwood. At this point it is called Elm Park. One contemporary historian noted that “The once beautiful Apthorpe mansion now houses a beer and dance saloon.”
The 69th Regiment used the park as their review and drill grounds in 1855 and the grounds were used for a picnics and sporting contests.
However, it was the afternoon of July 12, 1870, that people remembered. On that day three thousand Irish Protestants were enjoying a picnic on the grounds of Elm Park. A mob of Irish Catholic laborers entered the park in what was to become known as the Orangeman Riots, killing five picnickers and injuring hundreds. 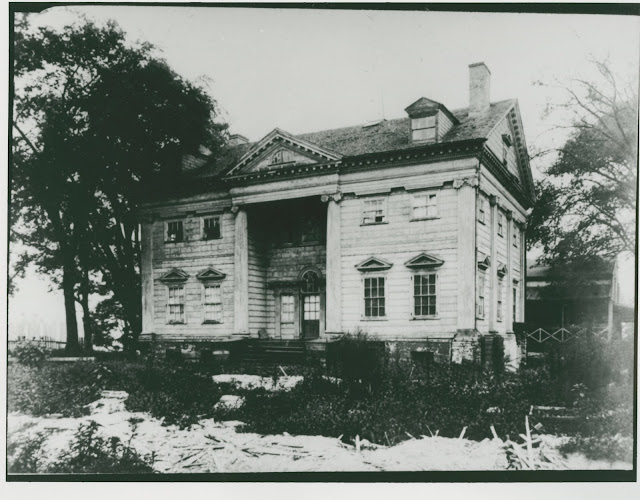 This is the house as it looked in 1891, just before it was demolished in favor of the ever encroaching city. The streets which ultimately cut through the property were laid out in 1811 and through out the post Civil War era those streets on a map became realities. There had been lanes going through the property, a wide lane lead from the house down to the old Bloomingdale Road and other smaller lanes cut through as well. Jauncey Lane and Striker's Lane were two lanes (that also served as property lines). Striker's Lane is significant as it is the name of the family that received a piece of the Apthorpe property after 1783 and was the name of the bay at what is now 96th street and Riverside Drive. The Striker's owned an inn on the bay and you can be sure that this lane lead right to the front door of Striker's Inn. 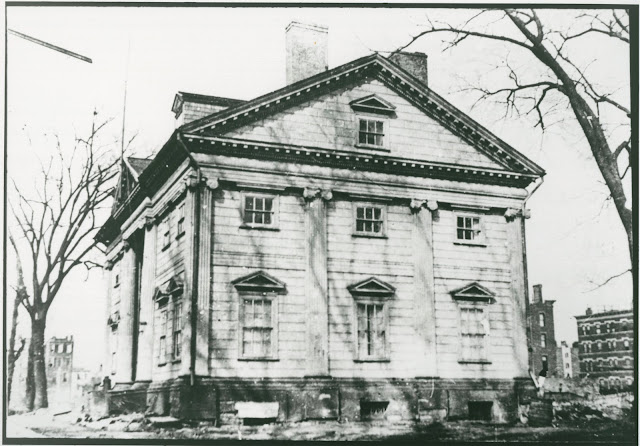 Another 1891 view. Apthorpe’s life was shattered with the outbreak of revolution. After the disastrous Battle of Long Island (really Brooklyn Heights) George Washington fled to Manhattan and up the Bloomingdale Road, a road that the British had laid out in 1703, to regroup, taking over the mansion as his headquarters. As soon as other American officers had moved their soldiers to Bloomingdale and the Elmwood estate, Washington moved on.

Within hours the British General Howe arrived, taking the mansion as his headquarters, remaining through the fighting of the Battle of Harlem Heights. Before the war was over, Sir Henry Clinton and Lord Cornwallis had also taken over the mansion.

With the final defeat of the British, Apthorpe was arrested and tried for high treason. For reasons never fully explained, he was released and permitted to keep most of his estate; although his sizable property in Massachusetts was confiscated.
On January 3, 1789 the mansion was the scene of the marriage of Apthorpe’s daughter to Congressional Delegate Hugh Williamson. Maria Apthorpe was described as “lovely and accomplished,” by the New York Daily Gazette. On April 4th 1789, the first Congress on The United States meets at the old Federal Hall (now the location of the Federal Hall National Memorial on Wall Street). This marriage says quid pro quo to me; in other words it would explain Apthorpe's release. Oliver DeLancey, Apthorpe's neighbor and a real thug (a rich boy thug - but a thug is a thug) lost everything and was deported to England.
Posted by New York Tours By Gary at 9:21 PM No comments: