The birthplace of a of song title. 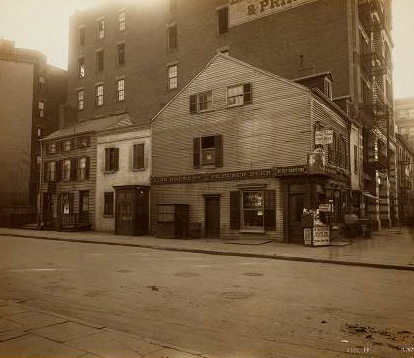 This is the south east corner of 11th street and 6th Avenue in 1911, before it was renamed "Avenue of the Americas. These wood frame structures predate the civil war. The building on the corner was and always had been a saloon. A real sawdust on the floor type of dive under the shadow of the 6th Avenue El. The saloon predated the El and was a very much a local place where everybody knew your name. Gossip was exchanged, people drank, people settled conflicts in various ways. However it was during the Civil War that this tavern found it's way into immortality.  In New York, while north of the Mason - Dixon Line, there were those harbored sympathy for the Southern cause.  It boiled down to this: If the price of cotton goes up, it will affect a bottom line. The south was the producer of cotton and northern textile firms were the major buyers.  In addition to having a business world interest in the war, the notoriously corrupt mayor at the time, Fernando Wood, made no secret of where his sympathies lied. Mayor Wood, buy the way, had a summer residence around 75th street and Bloomingdale Road. 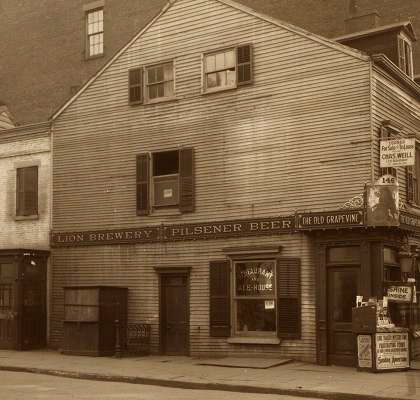 The “Grapevine”, according to legend, was a popular spot amongst southern spies, Union officers who were spying on the southern spies, and many incognito newspaper reporters.
Of course everyone knew that the locals would go drink, gossip and eavesdrop on conversations there, so the tavern became known as the place where many rumors originated. This became the origin of the phrase “heard it through the grapevine”. The newspapers began using this phrase which became part of the local dialect.  Skip ahead to 1966, a song is written by Barret Strong and Norman Whitfield for Smokey Robinson and the Miracles. Barret Strong was a singer with one hit (Money - That's What I Want) and could not find a follow up.  The old phrase was incorporated into one of the most famous American Pop songs of all time by local resident Whitfield.
These wooden structures were gone by 1915. On the far left of the top picture is is the still extant Second Cemetery of Spanish-Portuguese Synagogue, Shearith Israel. The First Cemetery is still down next to Chatham Square.
Posted by New York Tours By Gary at 10:20 AM No comments: