One More of Manhattan's Very Own West 110th Street 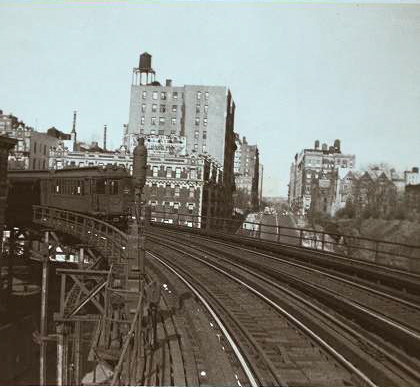 This picture was taken some time before 1940. This is a northbound Ninth Avenue Elevated train coming around "suicide curve", just south of 110th street. The reason I am so sure that this is before 1940 is that the Ninth Avenue Elevated was torn down in 1940.  Have you ever passed the corner of west 110th street and Columbus avenue and wondered why the buildings on the east side of the avenue were oddly shaped? The curve of the pre-existing before the tenements went up railroad dictated the shape of the structures on the site. This is where the Ninth Avenue Elevated curved off Columbus Avenue, headed down 110th street and turned north to head up 8th Avenue.
Looks remarkably the same, doesn't it?  The still extant building on the south west corner of 110th and Columbus, the grounds of Saint John The Divine just across the street.  A little further up on the south side of 100th street towards Amsterdam Avenue, after the taller apartment building, what appears to be undeveloped land is the landscaped grounds (very small grounds) of the hospital known as "The Women's Hospital".  A newer high rise and a Con Edison facility sit on the spot now, but other than that it still looks the same.
Posted by New York Tours By Gary at 10:09 PM No comments: