Appalachian or Harlem Farmhouse? Regardless of the condition, the tenements inthe background should give it away. 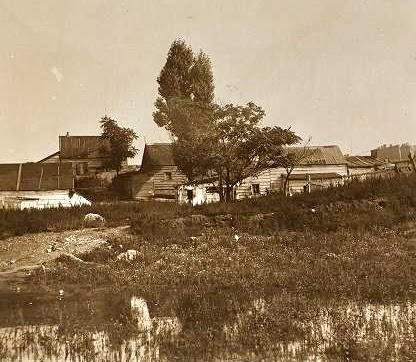 Once upon a time, on the isle of Manahatta, amongst the somewhere between 300 and 1200 Lenape who made what would become some of the most expensive real estate in the world a full time home, there were more eco – systems than what exists in Yellowstone Park.  There were deer, cougars, eagles, egrets and bears (not the picnic basket stealing kind).  In her book The Measure of Manhattan, author Marguerite Holloway sums up all this nature with some surprising figures for those of us who are used to and need the concrete.  “Among 10,000 species (not including insects, molds, mosses or micro-organisms), there sandy beaches, eelgrass meadows, red-maple hardwood swamps, grassland and pine – scrub oak barrens there were 21 lakes or ponds and 66 miles of streams” she writes.  I like nature, don’t get me wrong, but I love that it is somewhere else, especially the molds and mosses.  I am not alone with these sentiments either.  What I am astounded by is the fact that change did happen so quickly considering the big picture of history but also that it once was. Change did not happen in an instant and there were vestiges of this islands rural past late into the 19th century. 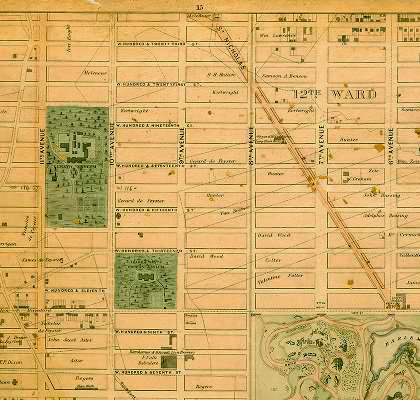 This is the 1867 map of Manhattan showing the northwestern corner of Central Park.  Although the park would not be officially complete until 1871, they knew what was to be.  The items that are missing are any reference to what would become Morningside Park or any suggestion that the topography there is a cliff.  This cliff and very steeply sloped area was considered to be too “severe” for any extension of the street grid.  Although New Yorkers had become adept in getting rid of natural obstacles by the mid – 19th century, the area will be deemed unsuitable for residential development and ripe for conversion into a park. 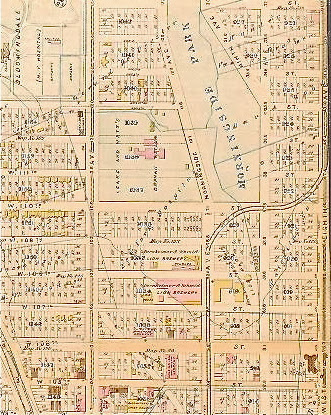 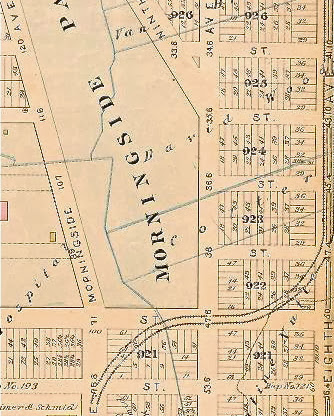 These are from the 1885 map showing the soon to be completed Morningside Park.  The gentle curve of the Ninth Avenue Elevated makes its way over to Eighth Avenue along 110th street.  With the El bypassing of the plateau known as Morningside Heights, residential development was slow to blossom but not the resented institutional as the Heights became home to an insane asylum, a hospital and an orphanage.  Notice that there is no station at 110th street yet as it was believed the tracks were to high for a station to be placed and that Morningside Avenue is called Ninth Avenue.

In 1867, Andrew Haswell Green, the Commissioner of the Central Park project (it was called the Greensward Plan after all) recommended the park idea.  The City had taken control of the land in 1870 and a design competition was held in 1871.  No one got the contract as the Board of Commissioners of Public Works rejected all the design proposals submitted, including the scheme introduced by the heroes of Central Park Fredrick Law Olmsted and Calvert Vaux. Their plan included a connecting park between the new Morningside Park and Central Park but this plan was not to be - what with the El in the way.  Architect Jacob Wrey Mould, whose floral and fauna carvings are all over the staircases leading down to Bethesda Terrace in Central Park was hired to re do the Olmsted and Vaux plans and work began in 1883.  Unfortunately Mould died in 1886 before work was completed and in 1887 Olmsted and Vaux were brought in to complete the project. 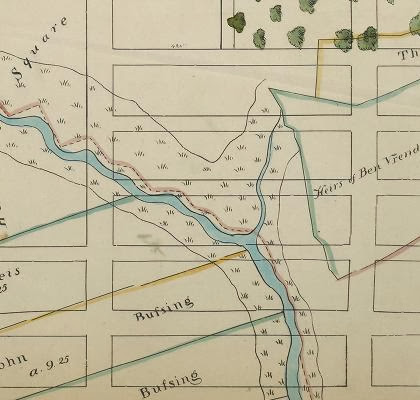 This is the 1868 map showing a section of the Harlem Creek. This is one of the streams and creeks that made up that 66 miles of waterways in this island.  It entered the island between 106th and 107th streets and the East River. It flowed over to what is now Central park and created a swamp at the bottom of a rise, a place called McGowan's pass. McGowan's pass was home to a Tavern, The Black Horse, owned by McGowan which was a favorite stopping off place of George Washington after the Revolution.  The creek then flowed north between 5th and 6th avenues and turned west just north of 116th street ultimately disappearing around Eighth Avenue and 122nd Street.  The creek had branches off of it in several places and was known as a great place to fish.  The Native Americans used it and so did the first Europeans to settle up in what Peter Stuyvesant called in 1658"Nieuw Haarlem".  The little village had a name change after 1664 when the British took over, they called the village just "Harlem". The Lenape called the area Muscoota.

This is a farmhouse along side what is left of the creek.  Note the newly minted tenements in the distance on the left, going north and west.  Muscoota really referred to the Harlem Plains, a mostly flat area where the soil was great and could support various crops as well as being an area abundant with wildlife.  The rise in the west around the area became Morningside, Saint Nicholas and Colonial (now Jackie Robinson) Parks.  The south western corner of the area, now 110th street and Morningside Drive, was a perfect place for the first settlers to build as they had the protection of a cliff at their back, not an open field.  In other words, it was harder to launch a sneak attack from the west.  So, given the location of the house, it is likely that the house was not there for the village of "Nieuw Haarlem" but was there for the village of Harlem.  This photo dates from 1893.

1868 map showing where the the house would be.  The map detail shows a five block area from 115th to 120th street (the bottom of the orchard) from 5th Avenue on the right over to 6th Avenue on the left. The house was on the north side of the creek. 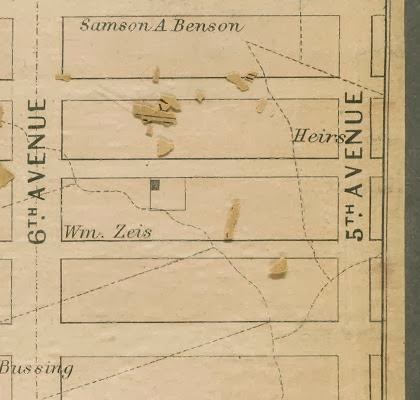 This is the 1867 map which for some reason has more information than the 1868 map, except the creek is missing.  The land is owned by Samson Benson and this is indicated on both maps. The little square right above the name "Wm. Zeis" is the house. 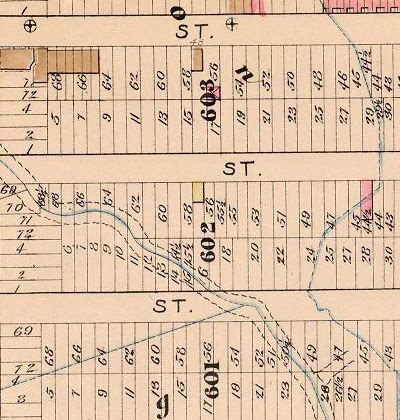 This the 1885 map indicating the house and what is left of the creek. The house is the yellow rectangle between 58 and 56 west 118th street, so I am guessing the house was eventually known as 57 West 118th.  The branch that once broke off from the main stream is indicated as well with dotted lines near the bottom left corner.  The number 602 refers to the block. The land has been divided up into lots but there is nothing there . . . yet.
Posted by New York Tours By Gary at 6:07 PM No comments: