Neighborhood Nightclub, Park West Village and the death of a man on a bus in New Jersey in 1956

On May 15th 1956, the New York Times ran an obituary of a man who suffered a heart attack and died on a bus. The man was 73 years old and for the past several years had lived in a rooming house in Bloomfield New Jersey, a suburb of Newark.  The article went on to say that in a jacket pocket a note was found directing that in the event of his death the powerful columnist Ed Sullivan (as well as several other newspaper columnists) should be notified. The man was born in Jersey City in 1883 as Herman Hinrichs but he was better known as Will Oakland, a singer who had made a fortune with his high tenor voice and was the idol of the "bobby soxers" of his day. He was the winner of many popularity contests on the 1920's and owned several night clubs in New York. His wealth and night clubs vanished in the stock market crash of 1929 just as his popularity was starting to fade. By 1934 he was filing for bankruptcy while working as a catering hall manager and entertainer in Valley Stream Long Island. He performed at the Palace Theatre in March of 1951.
Having quit school at an early age, he ran away to serve in the army during the Spanish - American War of 1898.  He sang with an Army band, then with a group called Primrose's Minstrels, changing his name at that point. The phonograph and eventually the radio soon established him as a top ballad singer.  And He owned a nightclub on the upper westside. 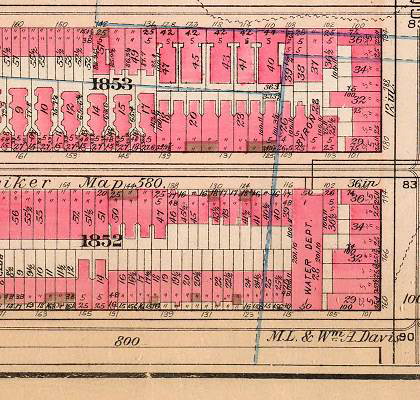 This is a map from 1911, showing the new Water Department facility and a long row of single family homes interrupted by two small apartment buildings. 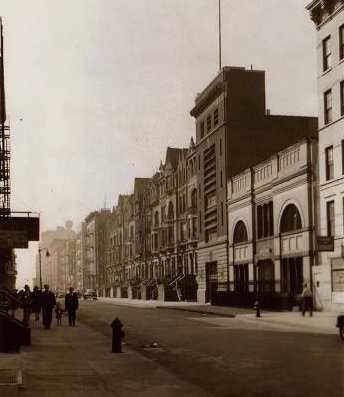 This is 97th street at Columbus Avenue looking west in April of 1941. The world was in the brink of war and now all of this is gone. The row houses, two small apartment buildings (visible on the map above), then a few more row houses and then Amsterdam Avenue. The building just to the left of of the 2 story structure with the arches is the local Department of Water facility, servicing the New Croton Aqueduct system of 1890 which originally augmented the Old Croton Aqueduct system of 1842. The old system, which south of 110th street ran along a stone aqueduct between Amsterdam and Columbus Avenues, was woefully inadequate for our ever growing city. It did, however leave us some charming stone gate houses such as the three along Amsterdam Avenue at 113th, 118th and 135th streets. But I digress . . . 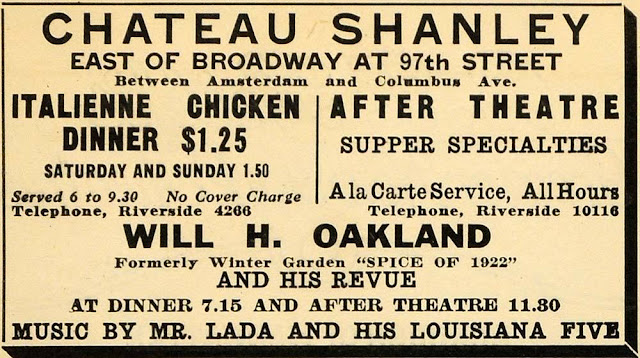 Maybe if he spelled Italian correctly, he might have not gone under during the depression. The location is given as "East of Broadway"so I am guessing that there was some sort of negative connotation about highlighting being between the two avenues.
The Winter Garden referred to as "Formerly Winter Garden 'Spice of 1922' " is the Winter Garden Theater, home to Mama Mia for as long as I can remember. 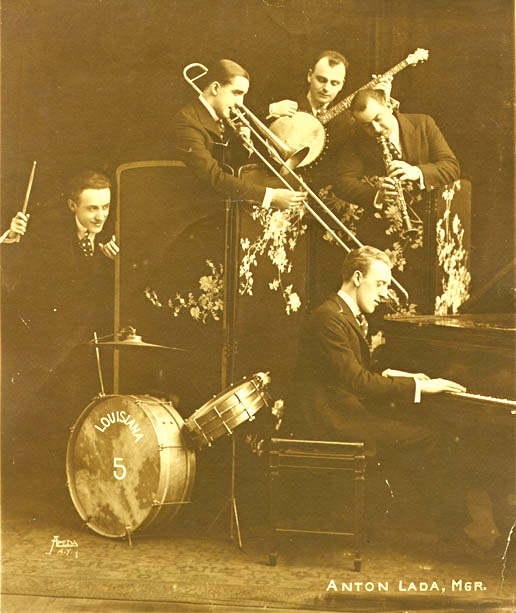 This is Mr. Anton Lada and his Louisiana Five. Among the earliest jazz groups to record extensively this band was active from right after World War One through the mid 1920's, The Louisiana Five was led by drummer Anton Lada. 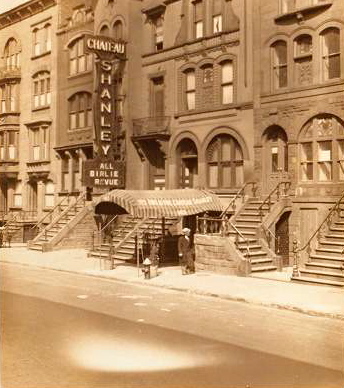 This is the front if 163 and 165 west 97th street.  Chateau Shanley occupied, it appears, the basements of two row houses. Part of this row, 161 - 165 west 97th street, was demolished in 1931.  This site is now occupied by the Alfred E. Smith School, built to accommodate the the large number of new upper westsiders moving into what was going to be called Manhattantown. In one of the many dark moments in New York City history, $15,000,000 worth of real estate was sold to a political insider for $1,000,000 by the Mayor's slum clearance committee, a developer who was ready to build. This committe used to their advantage President Harry Truman's well intentioned The Housing Act of 1949, a slum clearance initiative, to their advantage. All this agency had to do was to declare an area or neighborhood "blighted" or a slum, the next thing you know everyone is being Eminent Domained off their property and out of their homes for the alleged good of the community.  As soon as the idea was on the table in the spring of 1949, allegations of corruption began to fly which eventually lead to hearings in the Senate's Banking and Currency Committee in 1954.  These hearings and the delays of lawsuits put forth by the owners of the property in a large middle class African American community delayed the Zeckendorf's from reaping millions and postponed construction of what became a mostly white middle class enclave called Park West Village. If you think about it too much it looks as if Park West Village is a buffer between everything south of 96th street and the Fredrick Douglas Houses. If you think about it you might ask questions, I have always believed that history is a great deal of dot connecting.
Posted by New York Tours By Gary at 12:30 PM 3 comments: