New York's very own Waverly Theatre and how it got that way. 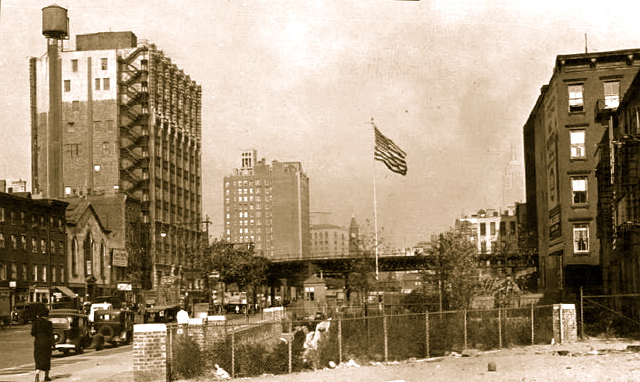 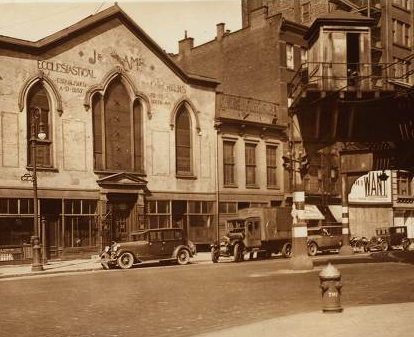 The structure that became the Waverly Theatre, now the IFC Theater, began life as a Dutch Reform Church in 1831.  At some point it became home to J. Lamb Ecclesiastical Art Works.  This firm was originally named the J & R Lamb Studios and was established in New York City in 1857 by the Lamb brothers. Their slogan was “the beautifying of churches” and the business expanded rapidly.  Their work, which originally focused on stained glass (their Paris International Exposition of 1900 prize-winning window, Religion Enthroned, is at the Brooklyn Museum) began to include mosaics, marble, carved wood and metal. The Lamb brothers produced countless works and whole interiors for churches, chapels, libraries, and private homes. 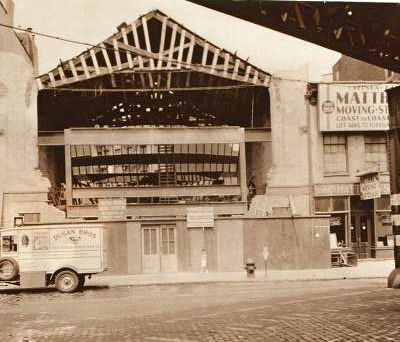 This is in Early 1937 and work is underway on the transformation of the church to a theater.
J. Lamb Ecclesiastical Art Works has obviously moved out and settled in Tenafly New Jersey were they still produce ecclesiastical art.  The Waverly opened later that year. 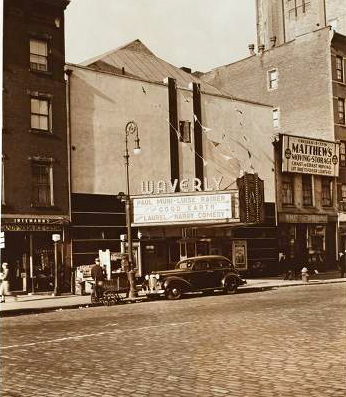 This is the completed Waverly Theatre, a theater very much part of our history.  A small, second run neighborhood house in Greenwich Village, the place were George Romero’s Night of the Living Dead opened in 1968, immortalized in a song (Frank Mills) from the musical Hair! And where thousands of pounds of toast was thrown at the screen during the mayhem that was the midnight run of The Rocky Horror Picture Show.  The picture playing is The Good Earth from 1937.  Nominated for a slew of Oscars, it only won Best Actress (Luise Rainer) and Best Cinematography for a man whose name you might recognize if you ever watched I Love Lucy – Karl Freund.  After serving as a cameraman then cinematographer, starting in Germany then in Hollywood for decades, he was hired by Desilu Studios to direct photography for I Love Lucy (he met Lucille Ball in 1947 when he was the cinematographer for Two Smart People at MGM).  Mr. Freund is the father of filmed sitcoms, having invented the three camera filming system still used today for live audience sitcoms.  He also “discovered”, on a Los Angeles department store loading dock, the material that became the standard for studio floors (the original floor of the studio that I Love Lucy was filmed was wood – which was standard – had to be replaced and this material allowed camera dollies to roll smoothly without tracks or creaking wood noises). Way to go Karl!
Posted by New York Tours By Gary at 11:41 AM