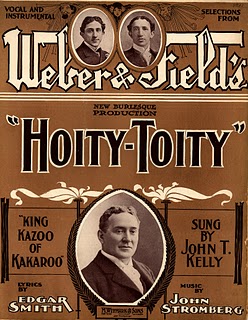 Weber & Fields were very much part of the vaudeville and variety show world for decades. Both men were born in New York in 1867, both men were Jewish performers who removed (or tried to anyway) any trace of ethnicity from their names (Moses Schoenfeld became Lew Fields and Joseph Morris Weber dropped the Morris), teamed up and became one of the most successful acts of the 19th century. After many years of touring in circuses, variety shows and vaudeville, the duo the duo settled back in New York. Lew Fields had a theater named for him by Oscar Hammerstein (it was to be his final Times Square project) in 1904. Fields did open the theater with a successful production of Victor Herbert's It Happened In Nordland but the theater was a flop. Badly designed, cramped and full of building code violations, the theater changed hands too many times to mention. It was here, however, when the theater was owned by Harry Frazee, that Lynn Fontanne played her first starring role in 1921. Harry Frazee was not only a producer and theatrical agent but he owned the Boston Red Sox and traded Babe Ruth to the Yankees in 1920. He claimed, then later denied, he did this to finance the Broadway production My Lady Friends which was the play upon which No No Nanette was based.  The trade by Frazee of Babe Ruth to the Yankees gave birth to The Curse of the Bambino which prevented a World Series win by the Red Sox for 86 years. 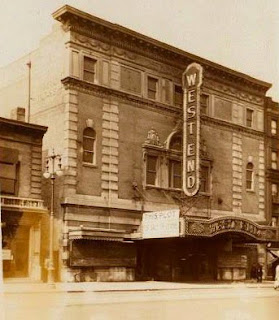 This is the West End Theatre. It was at the western end of the Harlem's Broadway, 125th street. It was built by a man named Meyer R. Bimberg, who was known popularly as “Bim the Button Man” for supplying customized buttons and banners to political candidates. The West End opened on November 3, 1902, in what was then a largely German Jewish and Irish Neighborhood. It was the built on the northern border of "white Harlem" and along the principle commercial street in the area and one of the world's most important entertainment meccas ever created. Within months of opening, Bimberg was been arrested for embezzlement and the theater was sold to the vaudeville team of Weber and Fields.
Never a hugely profitable venue, the West End was a high end vaudeville and subway circuit house. A large number of theaters in Harlem were on the subway circuit. In the early 20th century, before sound movies, way before TV, live theatrical presentations were the thing. To satisfy an ever increasing demand for new shows and to further and to satisfy the entertainment needs of the rest of the country, a Broadway show would play it's 300 performances then would move out to a neighborhood house (the previously mentioned Riviera on 97th street and Broadway for example) then would go out on the road. The Shuberts were among the big time Broadway producers who had lease deals with various theaters around New York City. According to the Shubert Archives, the West End was leased by United States Amusement Company, a Shubert-Erlanger vaudeville venture in 1907-08. From 1908 to 1912 it was booked as a part of the Shubert's "subway circuit" by the Sam S. Shubert Booking Agency.
Early headliners at the West End included the Four Cohans (which included George M.), the great African-American vaudeville team of Bert Williams (who W.C. Fields called "the funniest man I ever saw and the saddest man I ever knew") and George Walker and, in her final New York appearance in November of 1903, Adelina Patti, the Italian soprano. 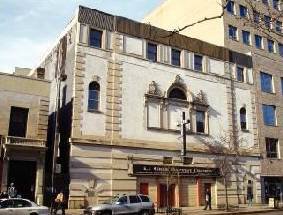 This the West End Theatre today, however it is now known as the LaGree Baptist Church. I have peeked in through the doors on several occasions and the interior seems to be in good shape. As with too much of Harlem, a building such as this is not landmarked.
The West End stopped showing pictures in 1975. In the years prior to that, it was home to an African American repertory company (in the 1920's), in 1937 underwent a renovation and reopened with vaudeville and movies.
There was a Weber & Fields Theater in Times Square. It stood on 44th street between Broadway and 8th Avenue.  It did not last long as Weber & Fields. The Shuberts bought it and renamed the 44th Street Theater in 1913. The Marx Brothers performed Animal Crackers here in 1928 while shooting their first picture Coconuts during the day out at what is now Kaufman Astoria.
Posted by New York Tours By Gary at 5:50 PM No comments: