Yet another lost theater on 125th Street 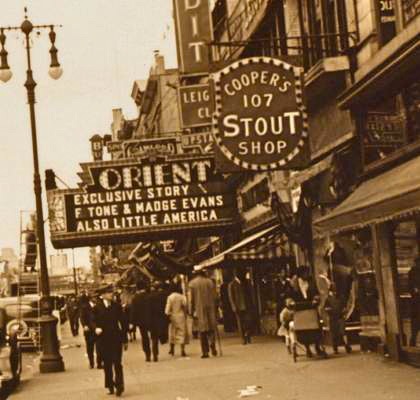 Harlem really starting developing in the late 19th century, as information about were the new subway was to be routed was leaked to those in the development arena. A great deal of Harlem, especially west of the New York Central tracks, was built nice. Like I have said the area close to 125th street, had a large number of theaters. There were theaters that are long gone in east Harlem, theaters that have survived as churches and theaters that are just sealed up. 125th Street was the magnet for all things entertainment. Oscar Hammerstein invested in this uptown theater district. His Harlem Opera House, discussed in earlier posts, opened in 1899 as a legit house, ultimately succumbing to vaudeville, movies and eventually the wrecking ball.
This is the Orient Theater. Located on 125th street just west of Lenox Avenue, it was in operation as early as 1915. It had a seating capacity of only 585. Usually, and I stress usually, a theater with a seating capacity of that size was not built with a stage. However, since my information on this theater is sketchy, it could have been built for legit then went over to motion picture exhibition. By the late 19th century and into the early 20th century you do not find many legit houses that size. There are exceptions and this not a hard and fast rule. There certainly were smaller legit and vaudeville houses and there were theaters with very large seating capacities that were built with out stages.
The picture playing at the Orient is Exclusive Story, starring The Group Theater's very own Franchot Tone. It is an MGM picture released in 1936. Loew's owned MGM but perhaps not this theater. It could have been a second run independent house.
Posted by New York Tours By Gary at 12:49 PM No comments: