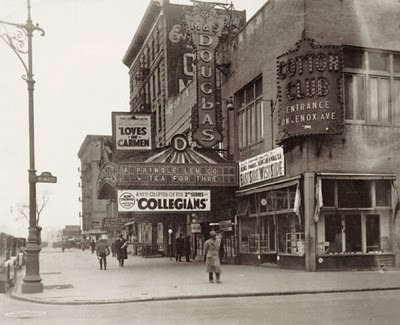 This is 143rd Street and Lenox Avenue. The Douglas Theater had, depending on which of my sources is correct, either 600 or 2200 seats (which in 1935 expanded to 2300 which could indicate that an orchestra pit was covered over to add more seating but that is a great many seats to cover over an orchestra pit with). I am going with the source that lists the larger capacity because the smaller capacity source lists the theater as active only until 1922. The picture playing when this photo was taken is a Fox picture, directed by the great Raoul Walsh, from 1927. Around the corner, like the sign says, is the entrance to the Cotton Club.
In a space once used as a club by the legendary African American boxer Jack Johnson, The Cotton Club opened in 1923 after gangster bootlegger hoodlum Owney Madden muscled his way in and forced Johnson's Club DeLuxe out. Although the club launched the careers of too numerous to mention here African American entertainers, the Cotton Club originally had a "Whites Only" policy. Duke Ellington was the club's orchestra leader from 1927 to 1931, replacing the great Fletcher Henderson (if it weren't for him, Benny Goodman would never have become the "King of Swing"). During Ellington's tenure, the racist policy was relaxed. After Ellington left, Cab Calloway took over as the orchestra leader.
Eventually the club moved south, to 47th street in a building just north of Duffy Square (were the TKTS booth is located). The Cotton Club closed in 1940 and then Lou Walters Latin Quarter moved in. The building was torn down in 1989 for a hotel. 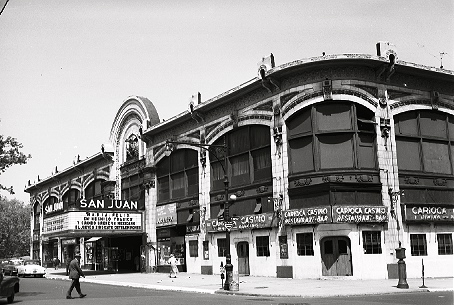 I know that this is a stretch and really this is Washington Heights but I am including it here because it is another theater lost and a loss to African American history. It was William Fox's Audubon Theatre of 1912. It was designed by the one and only Thomas Lamb. Named in honor of the naturalist James Audubon, this 2368 seat theater boasted a mural over the proscenium of George Washington leading the battle of Washington Heights. By the end of World War II the name of the theater and the language of the pictures changed. The San Juan had a Spanish Language film policy until it stopped showing movies some time in the late 1960's. It was ultimately torn down by Columbia University when they were expanding their medical facility. The facade was saved and restored and used in the new structure. 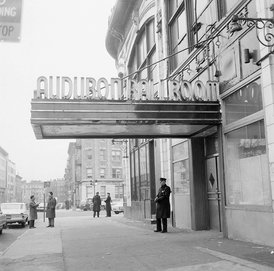 The Audubon Theatre had a ballroom in the building. The entrance was on the side. Even though the theater changed it's name, the ballroom remained the Audubon Ballroom and was forever etched in history in 1965 when Malcolm X was assassinated here while giving a speech.
Posted by New York Tours By Gary at 7:53 PM No comments: