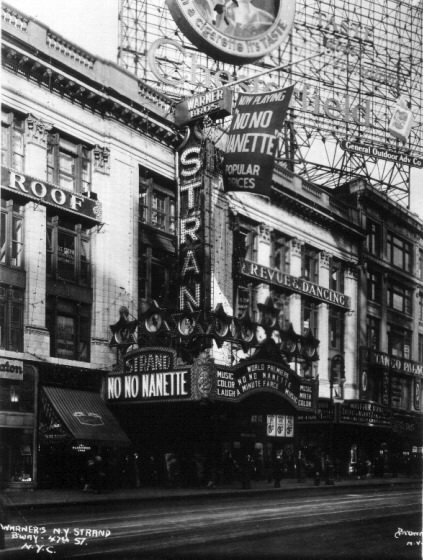 I am resuming my following Thomas Lamb around, in this case around the Times Square area.  This is the Strand Theatre.  Some of us remember this house but if you do, you probably remember it by the last name it was given, The Warner Cinerama Twin. Actually one of the theaters, what was originally the balcony of the Strand, was called The Penthouse.  I do not remember seeing that name on the marquee but I'll bet it did not stick given the connotation of the name and the area's old reputation.
The Strand Theatre opened in 1914 and was developed by Mitchel Mark Realty Company.  Originally the house had a seating capacity of 2,989. The house began its life with stage shows in addition to movies; this venue had one of the largest stages in the city in 1914. Samuel "Roxy" Rothapfel made his move from 116th street and 7th Avenue down to the times Square area and this was one of his first stops. 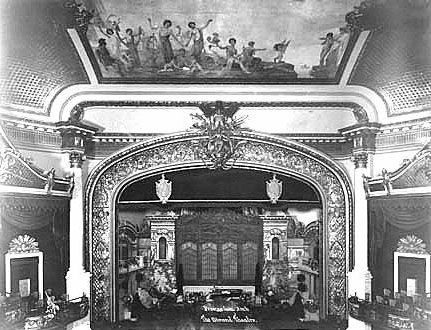 This is the stage set for motion picture presentation. The orchestra was placed on the stage to play along with the movie.  Roxy had started this practice while in residence at his previous place of employment, the B. S. Moss Regent Theatre on 7th Avenue and 116th street.  The screen was behind the center, four panel piece. Those panels would fold to reveal a screen. 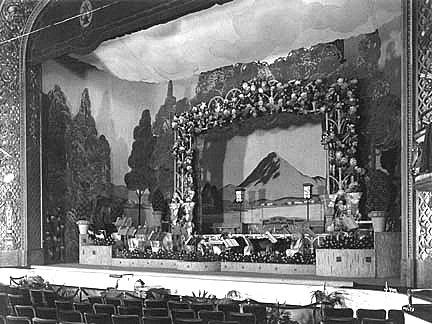 This is looking towards stage right and the orchestra is on the stage. This is a different set than the previous picture but the idea is still the same.  I believe that a screen would be lowered in front of that mountain backdrop. I am not sure what the two standing items are, behind thew orchestra and in front of the mountain. I had thought that they were work lamps, placed on stage overnight after the last show and removed the next day, but I am not sure. 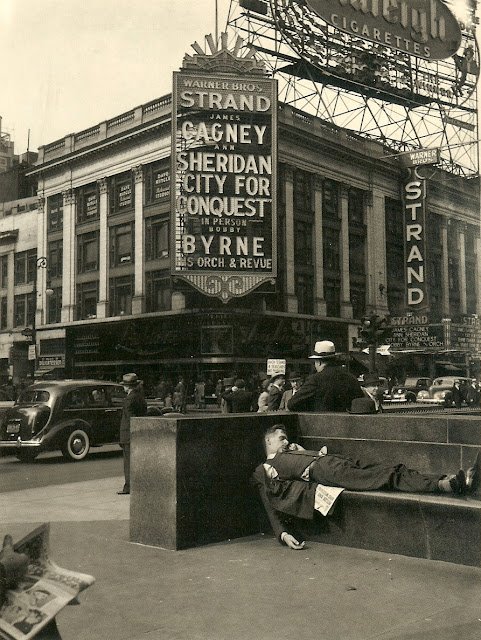 The depression hit and, as in a great many theaters, stage shows were dropped in 1929.  Vaudeville was becoming too expensive. Of course the advent of sound pictures did help your poor vaudevillian. However "Vitagraph Shorts" were the beginning of the end for too many performers. These shorts were usually of vaudeville acts that were filmed with synchronized sound disks, basically a record that was played on a turntable.  The expression "wired for sound" came out of this process.  Since the big studios had controlling interests over a large number of theaters (except for Loew's which controlled MGM) there was competition between various sound techniques and this was the Warner Brother version. Wiring their theaters for the vitagraph was a sell point to get people in the seats but it was expensive. In addition, if the film broke (as could happened back in the day), you were doomed in terms of re-synchronizing the picture with the sound.  Not long after the vitagraph hit, Western Electric Laboratories, in the old Western Electric Laboratories building now known as Westbeth, the sound on film process was invented and perfected.  But I digress, as usual.  The Vitagraph Shorts, referred to as "canned acts" (the film came in a can) could be rented for far less than what would have to be paid to a performer for a week.  Could this be a victim of canned acts? I don't know but the picture playing is from 1940. 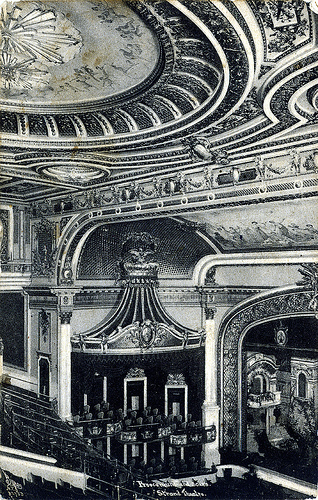 This is looking towards house left.  Mr. Lamb is getting more elaborate in his wall and box treatment.  Similar to what he did at the Hamilton and the Regent, Lamb has boxes along side the orchestra section.  The house was only a little over a year older than the Hamilton but it was built with motion picture exhibition in mind.  Above the boxes, above the ornate crown, the lattice work covers the organ works.  When stage shows where dropped in 1929 seating was reduced to 2,750. 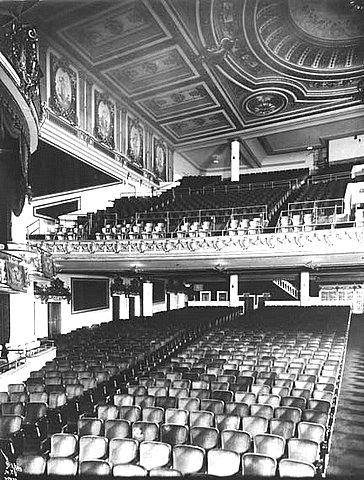 House right from the stage. 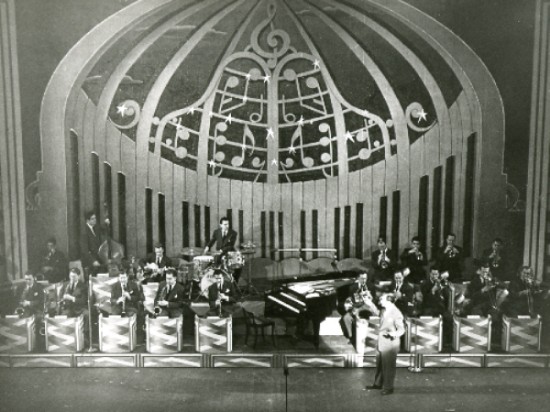 In the late 1930's stage shows and vaudeville were brought back to the Strand. This is Claude Thornhill's Orchestra in a 1947 appearance. 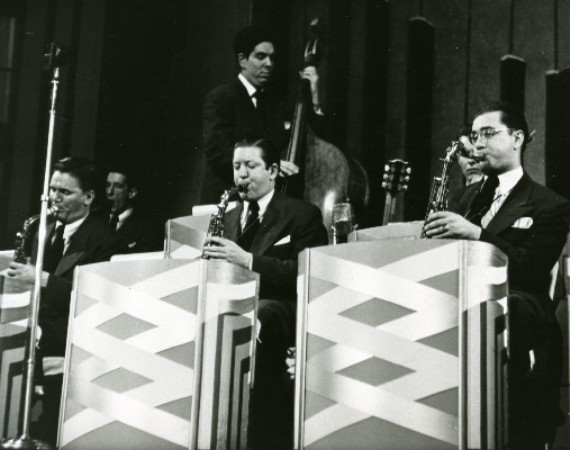 This is a close-up of alto sax player Ted Goddard during this gig at The Strand. 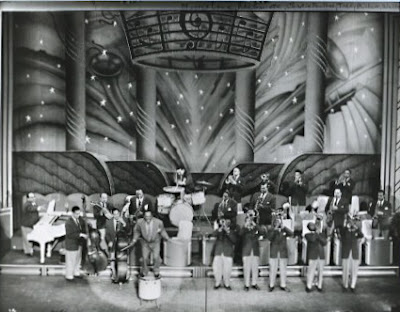 This is Lionel Hampton at The Strand in 1948. 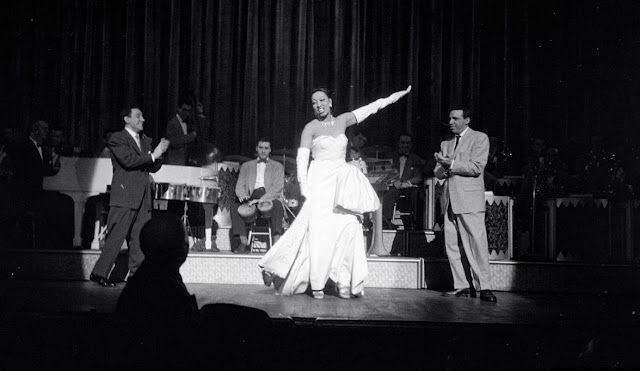 This the Josephine Baker on stage with Buddy Rich (her left, our right) and his orchestra. While appearing at The Strand, Ms. Baker is said to have worn an assortment of designer gowns valued at $150,000. On her right (our left) is comedian Leo De Lyon. Odd name for a some one working in a Warner house, he should have been working at a Loew's theater as Leo the Lion was the MGM symbol. 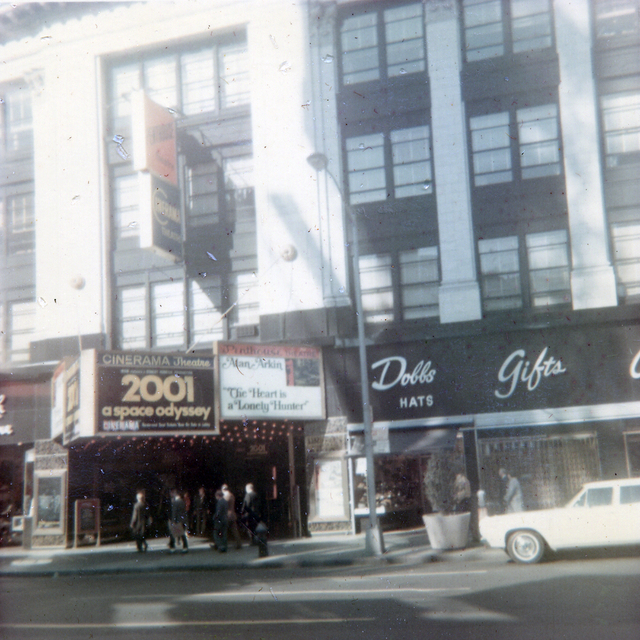 On July 30, 1968, the theater reopened after being triplexed. The Warner Cinerama Theatre with 1,000 seats occupied the main floor. The former balcony became the 1,200 seat Penthouse Theatre. A third theater built in the old Stand’s stage house was also opened, called the Cine Orleans, which had a separate entrance on W. 47th Street. In the early-1980’s the Cinerama and Penthouse were remodeled and renamed the RKO Warner Twin, the name I remember.
Unfortunately, in 1987, after a long and eventful life, one of Thomas Lamb's greatest movie palaces in New York City closed and was demolished.
Posted by New York Tours By Gary at 2:23 PM 1 comment: