Oldest Photograph of New York - The Mystery of the Location. 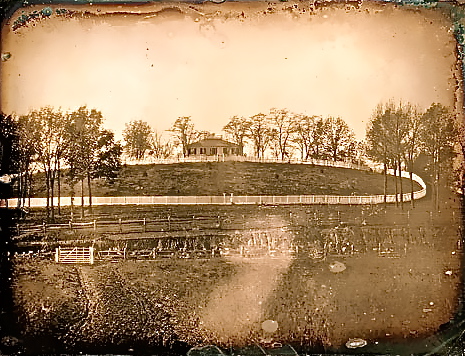 This is possibly the oldest photograph, actually a Daguerreotype, of New York City. I have enhanced this image to provide greater detail.  The original sold for $62,500 at an auction at Sotheby's in March of 2009. The photo was found at a small auction in New England with the following handwritten note attached:


This view, was taken at too great a distance, & from ground 60 or 70 feet lower than the building; rendering the lower Story of the House, & the front Portico entirely invisible. (the handsomest part of the House.) The main road, passes between the two Post & rail fences. (called, a continuation of Broadway 60 feet wide.) It requires a maganifying glass, to clearly distinguish the Evergreens, within the circular enclosure, taken the last of October, when nearly half of the leaves were off the trees.

So does this mean it is 1848? More importantly, were on the Bloomingdale Road is it? 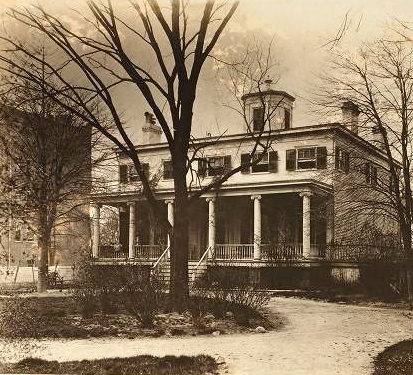 This is one possibility, this might be the house in the photo.  This photo is from about 1902 of a house on the east side of Broadway between 100th and 101rst Streets. Broadway had only been called Broadway north of 59th street for 3 years, prior to that it was called "The Boulevard".  The Bloomingdale Road, a road that was, for the most part, absorbed into the grid of 1811, ran just east of the current Boulevard and the even more current Broadway. The house at the time of this photo was the residence of Reverend J. Peters. It was replaced by Emory Roth's 210 West 101rst Street.
Notice the 5 widows across the second floor. 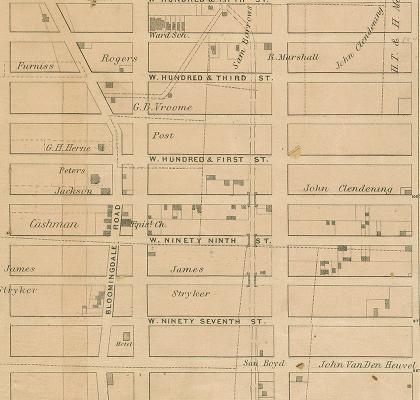 This is a map from 1867 which clearly indicates the Bloomingdale Road. Along the Road, between 101rst and 100th streets, in between the properties labeled "Peters" and "Jackson", there is a structure. Obviously the Reverend Peters owned the house and the land in 1867.  The Boulevard or Broadway of the future is indicated by a shaded in road (or avenue for lack of better description). 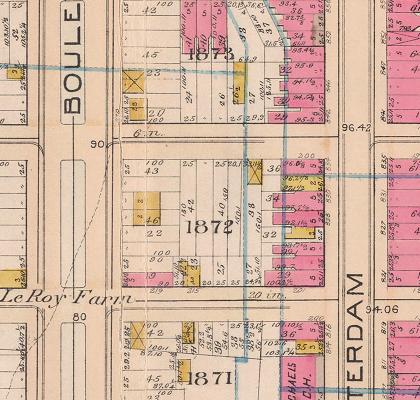 This is a map from 1897. The house is very close to The Boulevard, it is yellow indicating that it is a wooden frame structure. It is located in block number 1872 and has a "46" on it. The blue lines to the right are the old boundary lines of the Bloomingdale Road.
Now the 1902 picture of the house clearly shows the front of the house. The house front faces west. Why? The view was better, you could probably see the river from the front porch when this house was built. If the photograph was taken from the east side of the Bloomingdale Road then we are seeing the back of the house.  This has to be were the daguerreotype was taken from, east of the road facing west. The location of the road in relation to the house in the 1867 map matches that of the daguerreotype.  Even with the indication on the map of 1867 of more structures in the area than in the daguerreotype,  the development is still sparse.  In addition there is a 19 year difference from the daguerreotype to the map and things change in this town over almost 2 decades.  As for the hill, New Yorkers have been leveling this island since the Dutch showed up in 1609, so a more dramatic hill in 1848 is not unusual.  The topography has changed on this rock so much that I can accept an uphill slope towards the west from somewhere in the middle of or just east of what is now Amsterdam Avenue.
Posted by New York Tours By Gary at 1:17 PM 4 comments: