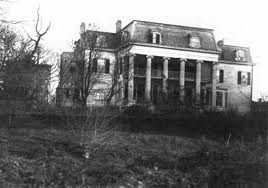 This could pass as a southern plantation but it was really on the block between West End Avenue and Riverside Drive between 99th and 100th streets. It was referred to as "The Colonial White House", but it was a nickname.  The columns are what sparked the comparison to the executive mansion in Washington DC. 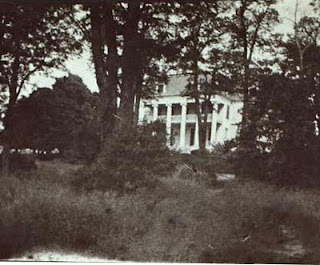 The house lasted until 1910. The property, along with the house, was eventually replaced by 276 and 270 Riverside Drive. 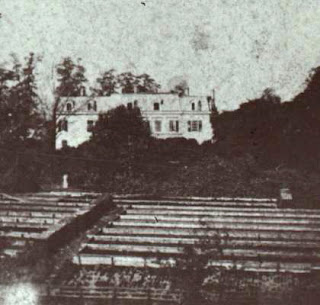 This grainy shot is of the back of the house, the eastern facade, looking from West End Avenue. That appears to be some sort of crop growing in the foreground.  This is one of the properties that lost a chunk of their front lawn. Eminent domain prevailed and Riverside Avenue, renamed Riverside Drive, was cut through by 1880. 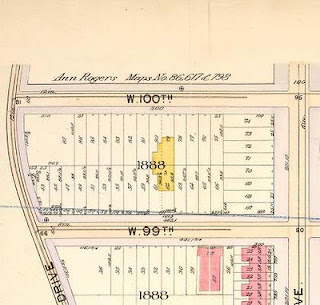 This is the house, it is yellow as it is a wooden structure, in a post Civil War map.
Posted by New York Tours By Gary at 8:12 PM No comments: 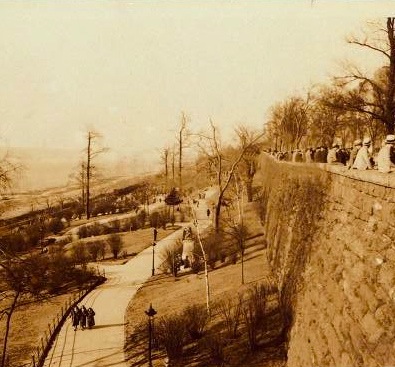 This is Riverside Park at 103rd street looking north from the top of the stairs next to the stone wall from 1879. This time it is winter and it looks like the 1920's. 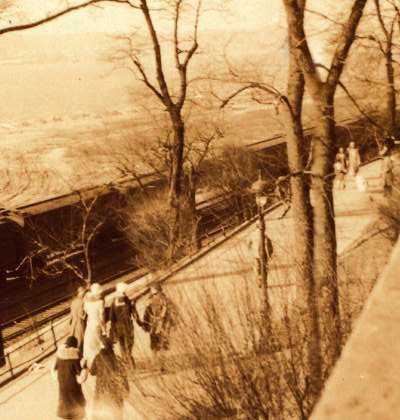 This is part of the same series. The path next to the train tracks was probably located just a little east of the promenade that is now over the tracks. The park had a great deal of re-landscaping during the Westside Improvement Project and the tracks were covered, not moved. The field to the west of the tracks is landfill that will very soon be the West Side Highway, the ball fields and the swing rings at Hudson beach. 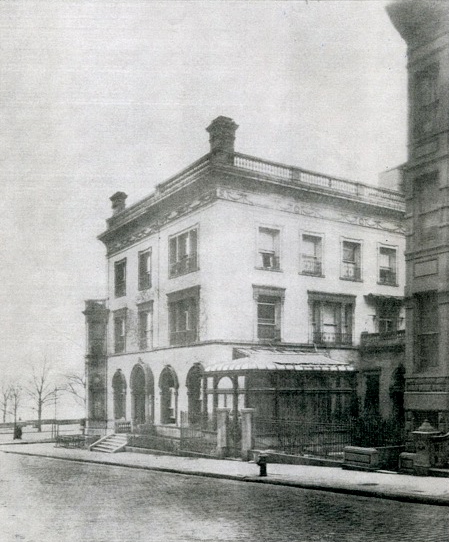 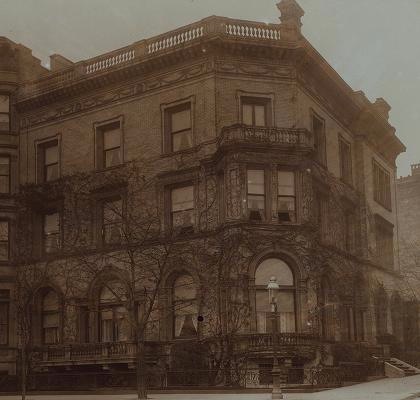 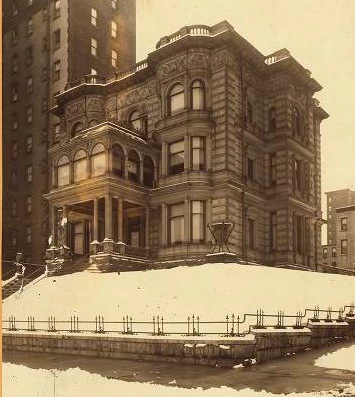 This is the original 300 Riverside Drive. It was owned by a family named Foster so it is often referred to as The Foster Mansion. Riverside Drive was on the original map of 1811, not as Riverside Drive but a street was there. Some maps refer to a "13th Avenue". It was not until the late 1870's that any serious work began on Riverside Drive. Then there were the law suits. Some of the households along the stretch now called Riverside Drive owned, or claimed to own the land, that extended way beyond the current lot lines. Where the drive now sits was disputed land in many cases. 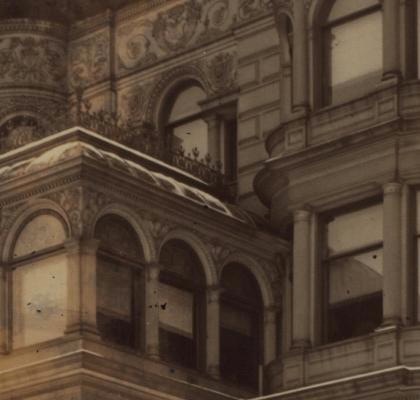 This is detail of the Foster Mansion.
Posted by New York Tours By Gary at 8:02 PM 2 comments: 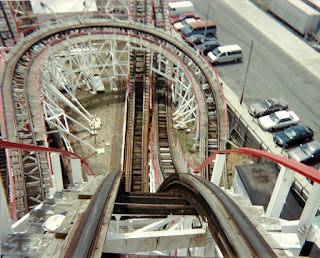 This is the view from the front seat of the most terrifying roller coaster in the world, The Cyclone. Opening in 1927 at a cost of $175,000, the ride known as a "compact twister chain lift launch" roller coaster reaches a top speed of 60 miles per hour and lasts just under 2 minutes.  The picture shows what you would see if you kept your eyes open as you approached the first drop, an 85 foot 60 degree drop at that. As the train moves up the hill, an overwhelming sense of doom and awareness of this ride's age over takes you. If you are in first car, as you start to go over the top of the hill, the back of the train is still connected to the chain. This gives you a feeling of just hanging there 85 feet above the ground; This is why I have only one picture of this; the need to hold on to something outweighed the need to take pictures. I took this with a disposable camera on Friday August 1, 1997 (I just happen to remember that date as an article about Movie Place appeared that day on the front page of the New York Times). Not the first roller coaster in the world, not even the oldest. It is however, one of the greatest roller coasters ever built and it is fitting that it is in Brooklyn - the birthplace of the "Switchback Railway" which is the grandfather of all roller coasters.

All though there were earlier experiment with gravity powered rides in 15th century Russia called "Russian Mountains" and built under the orders of Russia's very own Catherine the Great in the Gardens of Oranienbaum in Saint Petersburg, a primitive roller coaster opened in 1784.  Some believe that the roller coaster was given to the world by the French. The Les Montagnes Russes à Belleville (The Russian Mountains of Belleville) constructed in Paris in 1812. 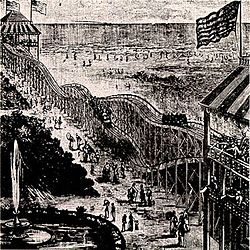 
In 1827, a mining company in Pennsylvania constructed what became known as a "gravity railroad", an 8.7 mile downhill track used to deliver coal. By the 1850s, the "Gravity Road" (as it became known) was providing rides to thrill-seekers for the outrageous price of 50 cents a ride. Using this idea as a basis, LaMarcus Adna Thompson began work on a gravity powered "Switch Back Railway" that opened at Coney Island, New York in 1884.  Riders had to climb to the top of a platform and rode a bench-like car down the 600 ft track up to the top of another tower where the vehicle was switched to a return track and the passengers took the return trip.  This track design was soon replaced with an oval complete circuit.  In 1885, another coaster pioneer Phillip Hinkle came along and introduced the closed-circuit coaster with a what is called in the industry a "lift Hill", called the Gravity Pleasure Road, which was soon the most popular attraction at Coney Island.  Not to be outdone, in 1886 LaMarcus Adna Thompson patented his design of roller coaster that included dark tunnels with painted scenery.  Called"Scenic Railways", these rides were to be found in amusement parks across the county from then on.
Posted by New York Tours By Gary at 12:30 PM 1 comment: 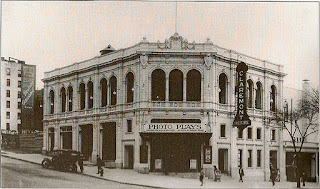 This is for my friends on 135th street. This theater was the Claremont Theater. With 1350 seats it opened in 1914. It was built for movies only, no vaudeville. It was designed by apartment building architect Gaetan Ajello, this was a departure from his usual line of work. The theater was gutted after 1933 when it became a automobile showroom. The space was used as a roller rink, dance hall and ballroom. It is now a "Tuck-away" storage facility. The White terra cotta front with it's motion picture camera at the top has been Landmarked by the city.

There was a Wurlitzer organ installation done just prior to opening and then it was repossessed by Wurlitzer in 1916. That organ was eventually shipped to a theater in Chicago and is now in a seminary somewhere in Illinois and is still playable.
Posted by New York Tours By Gary at 11:46 AM 2 comments: