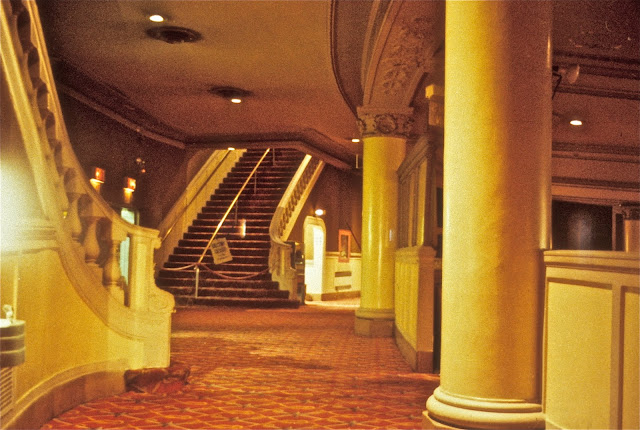 The Riviera, behind the orchestra section. 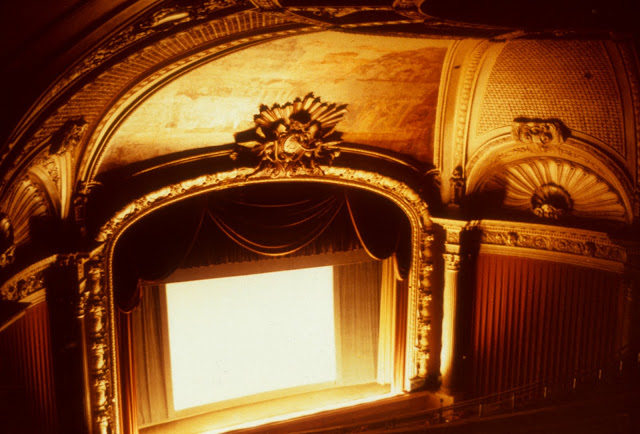 The screen is lit quite possibly by footlights. I have often wondered if they were original.  The red curtains cover the damage done by the removal of the boxes. The Riverside had some sort of lighting on the stage at this point as evidenced in the pictures below, not the case with the Riviera. Both houses underwent renovations in the 1950's. It was at this time that the Skouras Brothers owned the theaters.
The brothers Skouras started in St. Louis in distribution and exhibition and eventually went into production. Spyros Skouras became prsident of 20th Century Fox in 1942 and was instrumental in introducing Cinemascope. With this new wide screen process came the removal of boxes in many theaters across the country. Somewhere there is a pile of old discarded boxes. 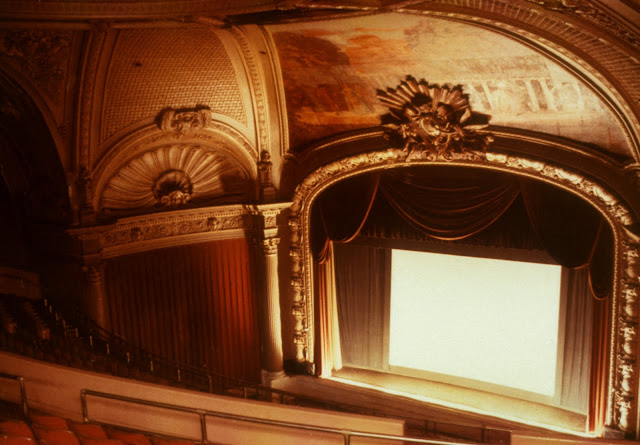 The Skouras brothers were notorious "modernizers". As you can see in these photos, there are not only no more boxes but no more orchestra pits as well. Very often orchestra pits were covered over to add an extra row or two of seats. In some cases, the Mighty Wurlitzer (or similar organ) would be left on it's lift, at the basement level, covered over by concrete slabs. Although there were multiple organ (Wurlitzer and Morton) installations at both the Riverside and Riviera, I am not sure what happened to them or where they ended up.  I do know that the organ up in the Japanese Gardens was abandoned and vandalized. 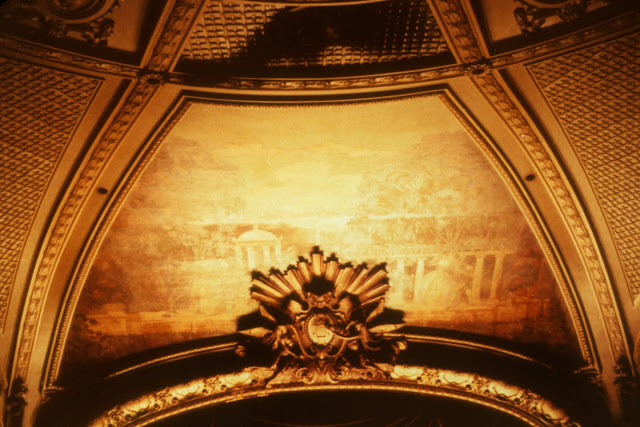 This is the mural on the sound board above the proscenium arch. Due to the terrible lighting it is hard to make out what it represents in this picture.
I read a story written by the man who took these photos. His real quest that day was to not only photograph these two theaters but also to photograph the Japanese Gardens above the Riviera.  The two elevators that went up there were had been out of commission for years. The stair case that went up to the Gardens from the elevator lobby had been sealed off long ago. According to the floor plans for the Riviera Building, there were no connections between the theaters and the office building. The only way they found to get into the Japanese Gardens was through 5 floors of Riviera dressing rooms, described as dark, dank and musty. 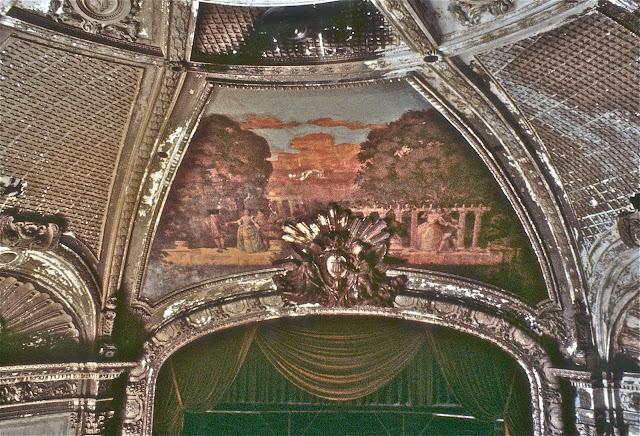 This is a digitally enhanced picture. Obviously, demolition has begun. The lighting in this case is mostly natural light. The mural on the sound board appears to be one of those life at Versailles pastoral images. Very Rococo. This mural, along with the murals in the Riverside, were probably not saved. This was in the pre-Urban Archeology days and nothing was saved or recycled. 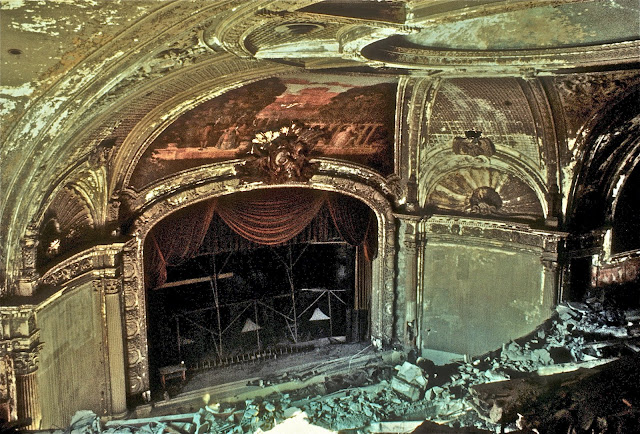 I digitally enhanced this picture as well. Once I scanned these pictures into my iPhoto, I became convinced that there was more to the pictures than what I was seeing.
Demolition on the Riviera began close to ten years after the collapse of the Riverside. The site, which almost played host to Gimbel's West, was a garden for many years. When the building that eventually went up on the site was built, the displaced garden moved to Riverside Park as is called the Community Garden. 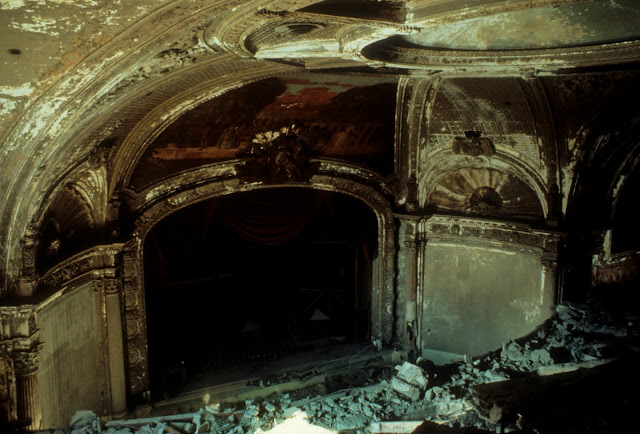 This is the un - enhanced, original version of the above picture. The theaters were photographed as discussion about their demise was bandied about. Alexanders had expressed a great deal of interest in the site for a new store, apartment tower and new single screen theater. Gimbel's had offered pretty much the same deal. However, neighborhood opposition to creating an overwhelmingly commercial area, at 96th and Broadway, scaled back the development to a 30 story tower of studios and one bedrooms (to meet the need of an ever growing swinging singles segment of society since the city was attracting a younger, less family oriented population and families were moving to the suburbs - or so the developer believed). However, there were a few cries about preservation, maybe 4. 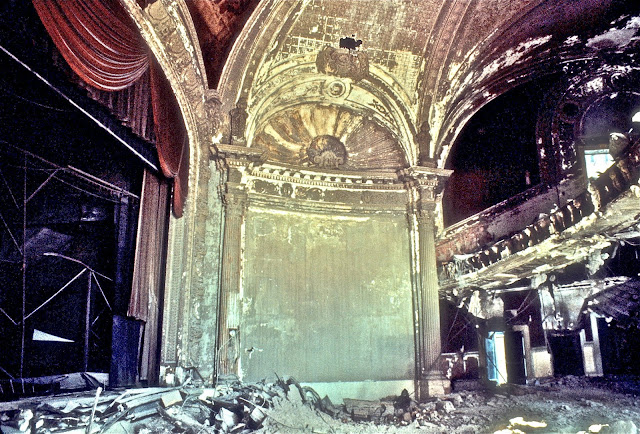 The wood frame structure on the stage was probably for the movie screen. The speaker horns are clearly visible behind the wooden frame. Again this is an enhanced picture. 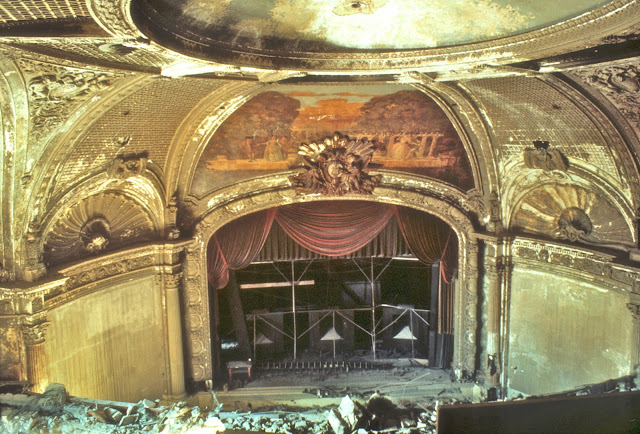 This is a digitally enhanced view of the stage. I do not believe that these photos were taken by the photographer of the "before" pictures. He was just an enthusiastic amateur theater historian, as far as I can tell, and the condition of the Riviera looks precarious. 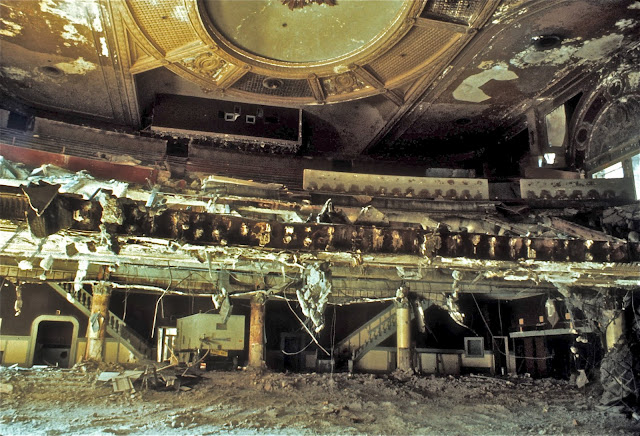 In an earlier post, I cryptically stated that after the Riverside collapsed and emergency personnel had dug through the debris for days, that no bodies were found - at that time. The two theaters were built a year apart, the Riverside (which had a longer construction period) in opening in 1912 and The Riviera in 1913, and were entirely separate buildings. There were connections made in the basement years later and it was during the demolition of the Riviera that,according to local legend and lore, two bodies were found in what was left of a connector passage between the still standing Riviera and the no longer with us Riverside. 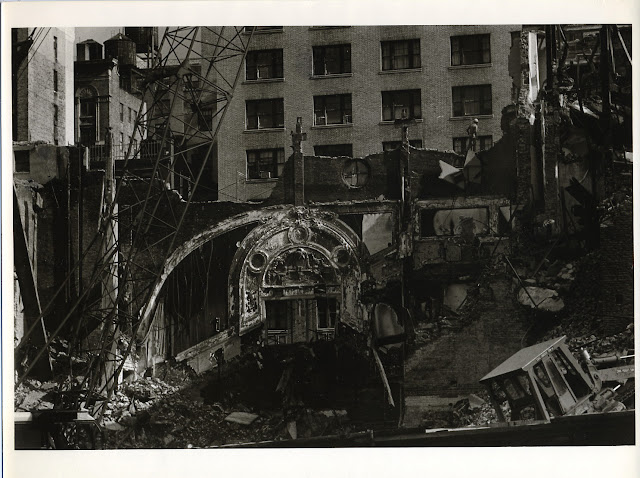 The last of the Riviera. "We will be judged not by what we have built, but by what we have destroyed" said the New York Times in an editorial about the destruction of the old Pennsylvania Station. How sad and true. The site, now the home to one of the least attractive buildings on the upper west side, was once an elegant entertainment complex that could seat almost 5000 at any given moment was certainly a gift. The entire complex was designed by Thomas Lamb, who also designed the Eltinge.
Posted by New York Tours By Gary at 1:20 PM No comments: 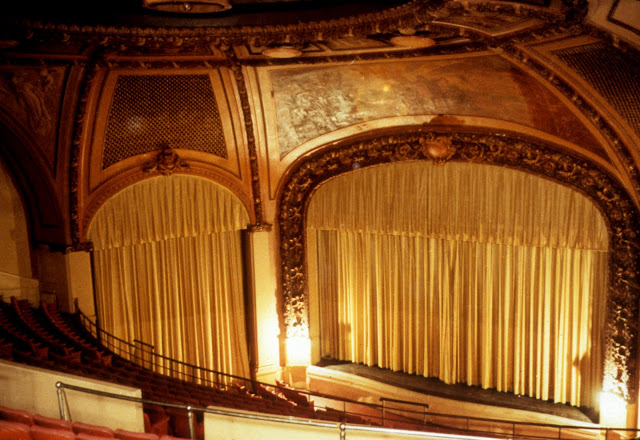 Looking towards house left at the stage from the house right balcony.  The curtains on the side are there to hide the damage done by the removal of the boxes. Not an uncommon situation in theaters of this type and age. The boxes often got in the way of wide screen presentations. 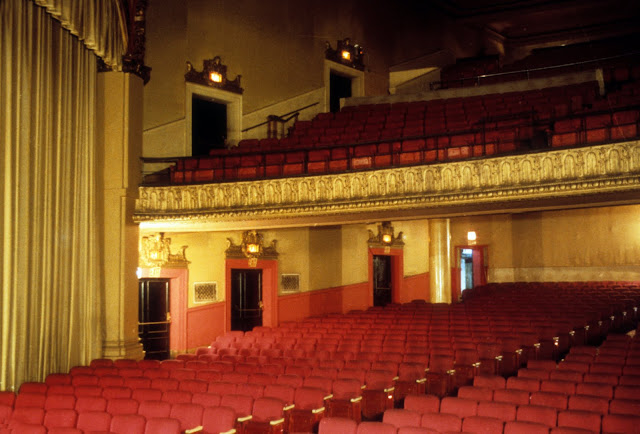 House right from stage right. again in the Riverside. 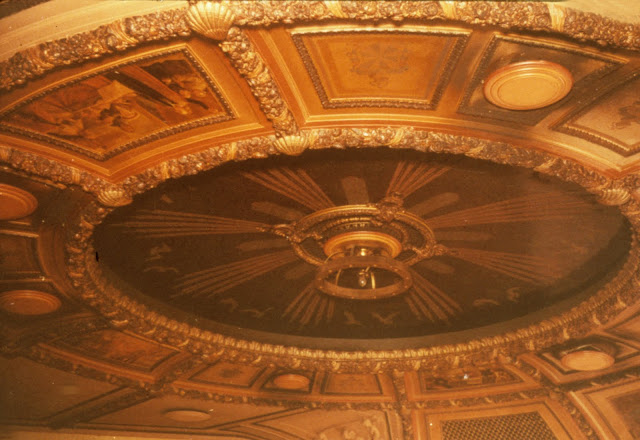 The Dome over the Riverside auditorium. Probably not the original chandelier. 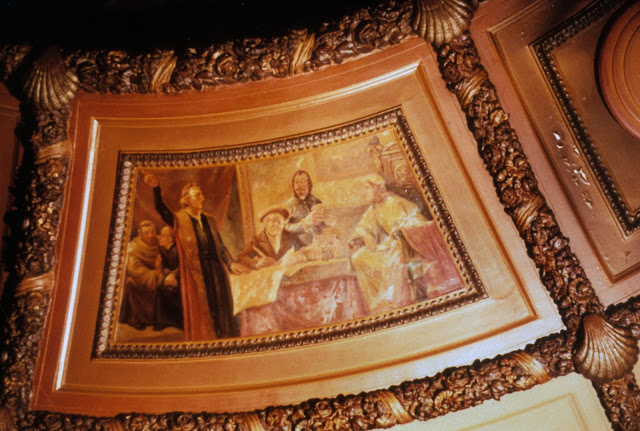 Detail from the ceiling of the Riverside Theatre. It appears to be Christopher Columbus asking for financing for his voyage west. The mural above the proscenium appears to be Columbus discovering America (maybe New York - how "urbocentric"). 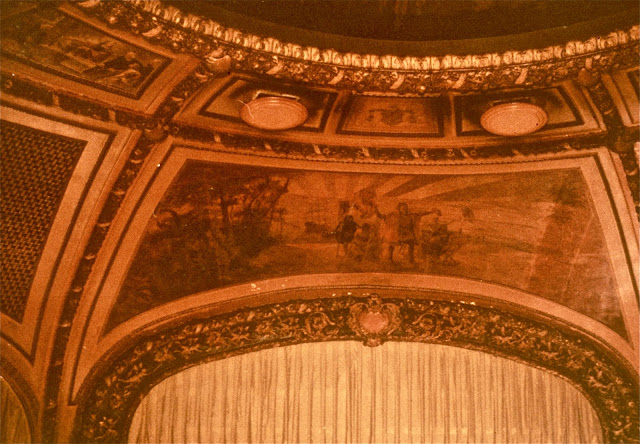 Soundboard above the proscenium detail.  Looks to me like he is discovering something. 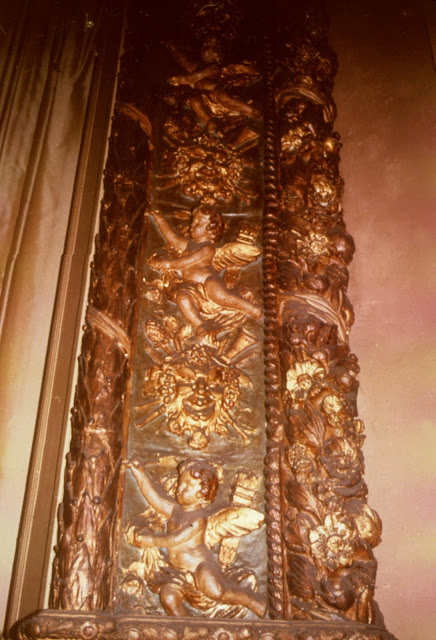 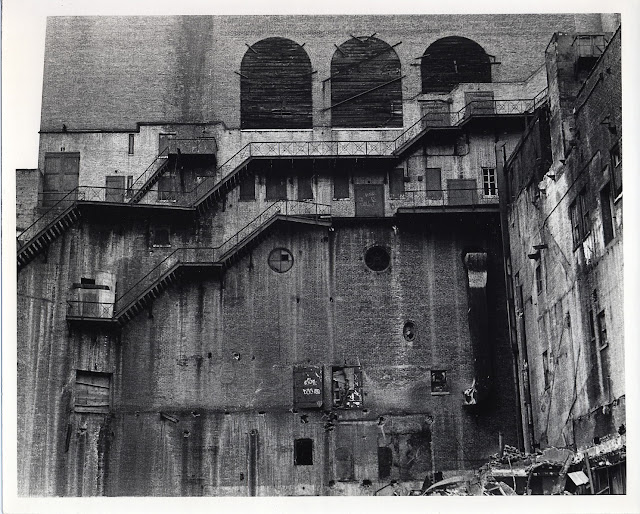 This is the south wall of the Riviera Theater, Japanese Gardens and the Riviera Building after the collapse and demolition of the Riverside Theater. I remember thinking, as a small child, that the balcony for the Riviera must be incredibly high, not knowing that there was a long closed theater up there. 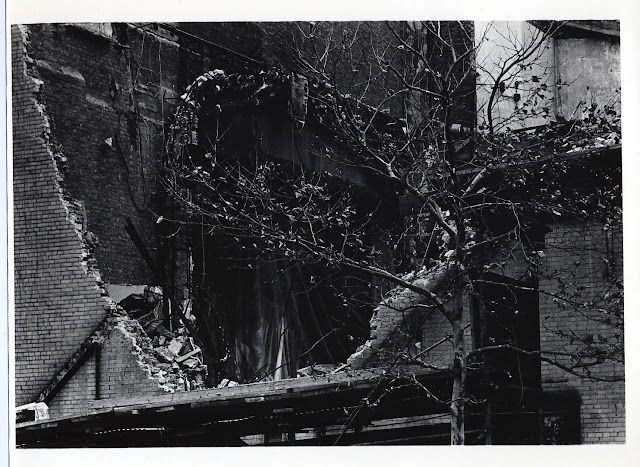 When it announced that a developer was going to tear down the theaters and put up a 30 story apartment tower (consisting of only studios and one bedrooms) I was devastated. They only managed to knock a hole in the side of the Riverside before running out of money. It was almost shocking to see the red velvet curtain hanging in shreds behind the now battered proscenium arch. The enormous balcony was collapsing. Then the whole thing collapsed out onto 96th street (several parked cars were crushed) and inward. The fire and police departments searched and dug for days, looking for crushed junkies that supposedly lived in the shell of the Riverside. I remember seeing a hysterical woman on the news screaming that her daughter with a drug problem was in there. No bodies were found, at that time anyway. 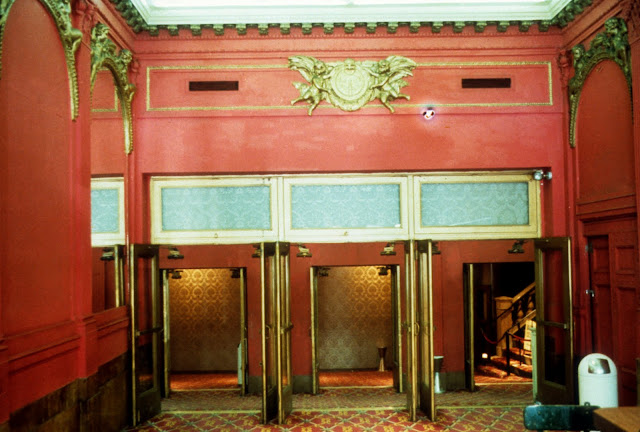 Outer lobby of the Riverside.
Posted by New York Tours By Gary at 12:48 PM No comments: 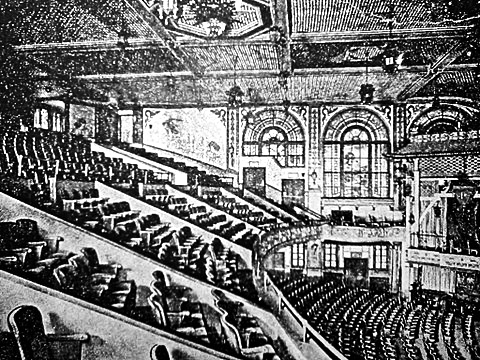 Interior picture of the Japanese Gardens just after seat replacement work had been completed. 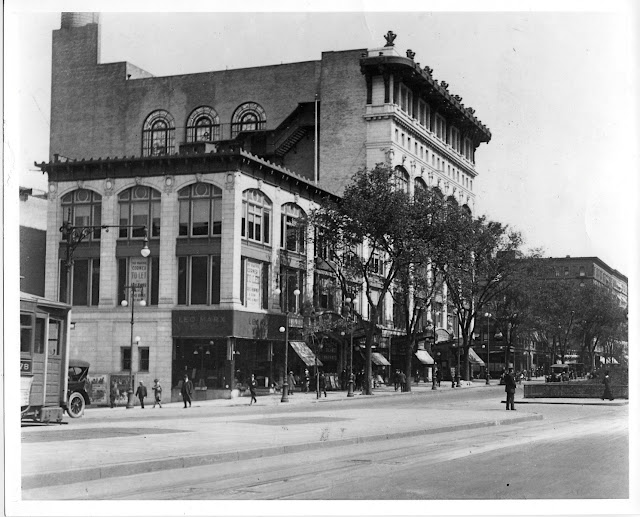 This is looking north west from the east side of Broadway between 95th and 96th streets. The large stain glass windows visible in the Japanese Gardens picture below are clearly visible in this picture. These windows were boarded over by the time I started going to the pictures.
Posted by New York Tours By Gary at 12:45 PM No comments: 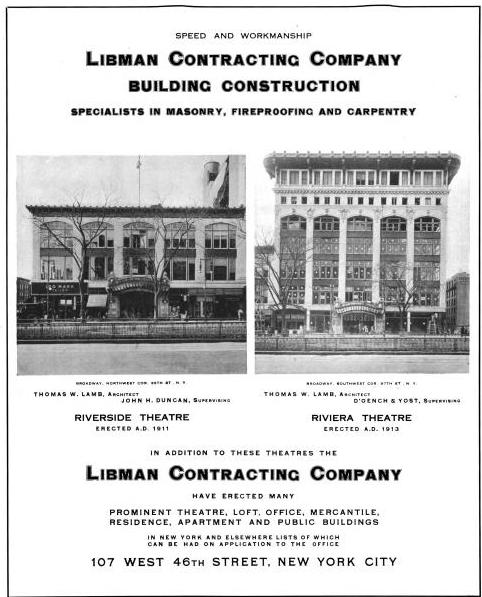 The Riviera was built with a revenue generating office building and another theatre above the Riviera designed for this new fangled motion picture thing, the 1579 seat Japanese Gardens. In part, due to it’s heavy Japanese motif, this theatre closed after “The Day That Shall Live In Infamy”. The other reason that this theater probably closed in early 1942 was that the fire escapes on the south side of the building went back into the building. Accessible by one staircase and two elevators, this was a tragedy in formation.
Posted by New York Tours By Gary at 12:42 PM No comments: 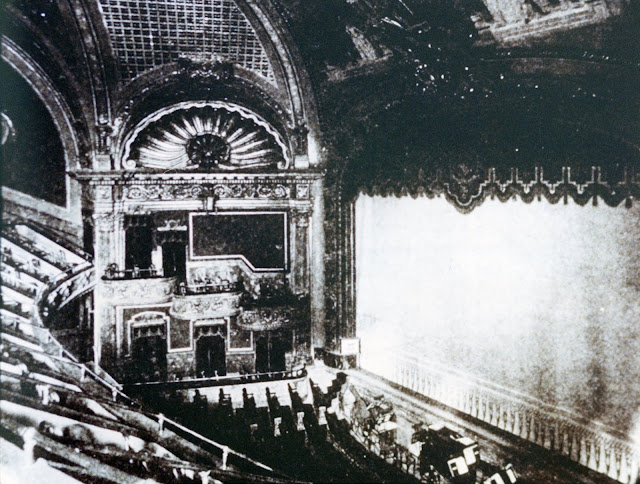 Mr. Fox then buys the lots next door and builds the Riviera Theatre. The Riviera was built as a legit house, on the old subway circuit. A show played its 200 performances downtown on Broadway then moved to a neighborhood theatre before going on the road. Records in the Shubert Archives indicate that from 1918 to 1931, the Shubert’s had a profit-sharing contract with Fox. The Riviera became the Shubert Riviera in 1923. In one of her first Broadway appearances, Bette Davis came through the Riviera in a show that had been on the road. In this case the road was a railroad.
Posted by New York Tours By Gary at 12:41 PM No comments: 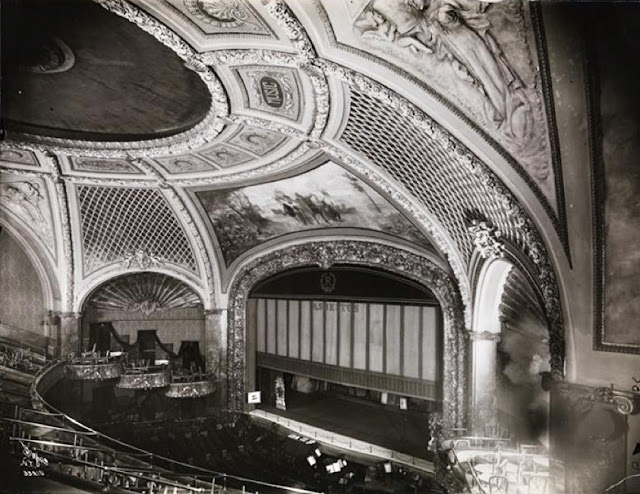 A very soon after opening shot of the Riverside Theatre.
Posted by New York Tours By Gary at 12:37 PM No comments: 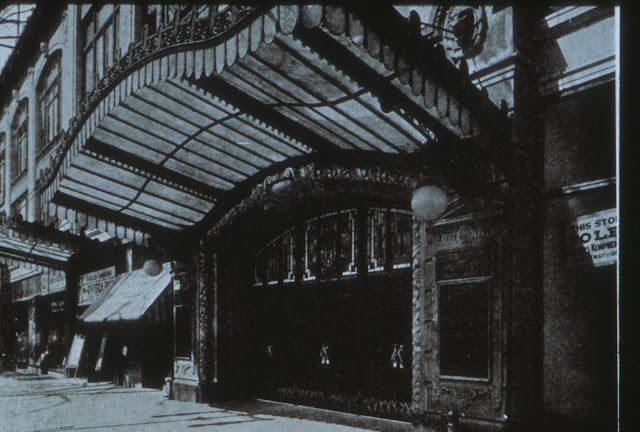 Broadway and 97th street looking south after the 1913 opening or the Riviera Theatre. 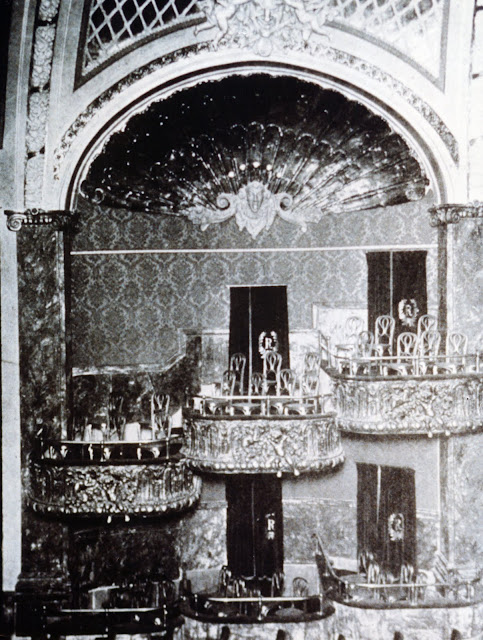 These are the house right boxes in the Riverside Theatre.  In 1911 William Fox, a theater owner and pioneering film producer is finishing construction of a large Vaudeville house on 96th street and Broadway. He is approached by agents of the powerful Keith Albee company - the largest Vaudeville circuit on the East Coast. They want to buy the practically finished 1710 seat Riverside Theater. Mr. Fox says at first says no but then threatened with the loss of all Keith Acts for his already established theaters he sells. The Riverside Theater was built for high end Vaudeville (only 2 shows per day). Sarah Bernhardt played The Riverside.
Posted by New York Tours By Gary at 12:32 PM No comments: 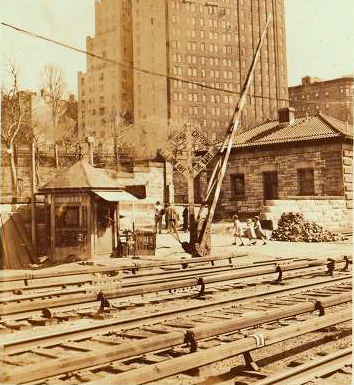 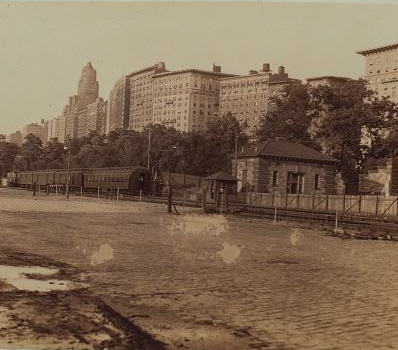 A theatre located at 96th and Broadway was ideally situated with a rail link two blocks west. A vaudeville show often traveled as a package, and by train. Up until recently, theatrical scenery flats were built to fit into railroad boxcars. Prior to the great depression and the WPA, 96th street ended at the Hudson River. There was no Westside highway. Access to the river and the New York Central freight line was as simple as crossing a street. The tracks under Riverside Park, built along what was the natural edge of Manhattan (the rest of the park and highway is landfill) have been there since the early railroad days of a pre-civil war New York. There had even been a passenger station at 96th street for many years before and after the civil war. The Westside Improvement created the rest of Riverside park, the highway and covered over the tracks, thanks in large part to Robert Moses and his persuasiveness with the WPA.

This is 96th street prior to the Westside Improvement.  The top picture is looking south, the building in the background is 230 Riverside Drive at 95th street and the kids crossing the tracks are really old now.  The third rail in the foreground is the same used today on the Metro North railroad (the LIRR and the NYC subway system use a different type).
The bottom picture is looking north. The train in the background is being pulled by an electric locomotive. Curiously, there is a passenger car at the back end. Passenger service on that part of the Hudson Line had ended decades earlier.
Posted by New York Tours By Gary at 12:13 PM No comments: