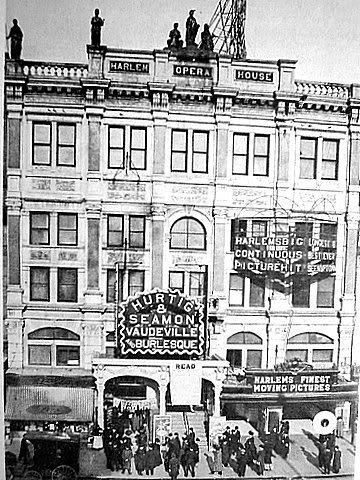 This is an early 20th century picture of the facade of the Harlem Opera House. Up until 1934, the house offered stage shows. Despite winning the Amatuer Night at The Apollo, Ella Fitzgerald was among the luminaries who graced the boards at the Harlem Opera House. As did the godfather of swing, local resident bandleader and arranger  Fletcher Henderson.  Henderson is credited with giving birth to Benny Goodman's style and making him "The King of Swing"
The marquee displays the names "Hurtig & Seamon". They are names more often associated with the theater down the block that became the Apollo, as they were the original owners. At some point after the 1889 opening, Oscar Hammerstein lost this theater (he had a bad habit of losing theaters) and Hurtig & Seamon took over. In the the late teens, the uber-powerful Keith - Albee took over.  By the mid 1920's Frank Schiffman took over the Harlem Opera House.  Schiffman was already a presence in Harlem,  having operated the Lafayette and in 1935 taking over the Apollo with Leo Brecher.
The facade shows two entrances. The main theater, in the center and then the upstairs (and smaller) theater for the "finest in moving pictures".

This is a program from March 16th 1904. The 16th is written in as the date March 14th is crossed out. The directors listed are Klaw & Erlanger, big time Broadway producers of the early 20th century (Broadway's very own Saint James Theatre was originally named the Erlanger). The owner appears to be someone named Lichtenstein. The name Hammerstein is not listed on this program. With the Apollo still 10 years away and the Victoria 13 years away, this was the second of the big important houses that made 125th street the entertainment center of Harlem. James Weldon Johnson in his book Black Manhattan referred to this theater district as the place where the African American actor was able to "finally make for himself a definite place on the legitimate stage of New York".  However, the change that was to come is still a few years away as this is an all white cast. 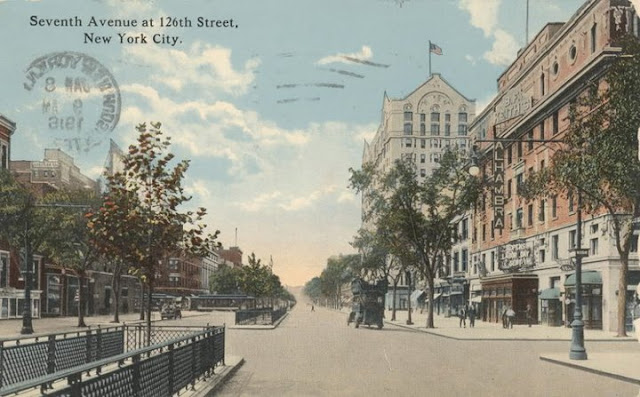 This is looking south on 7th Avenue from 126th street. On the right is The Alhambra Theater. It was designed by the architect who I have referred to as the Thomas Lamb of the late 19th - early 20th centuries, John B. McElfatrick. The original owner sold the theater soon after it's August 1905 opening to the almighty B.F. Keith circuit. It was vaudeville only until 1913 when movies were added to the program. Eventually this 1500 seat house became known as the RKO Alhambra. It now houses the D.M.V., a bowling alley and the Alhambra Ballroom. 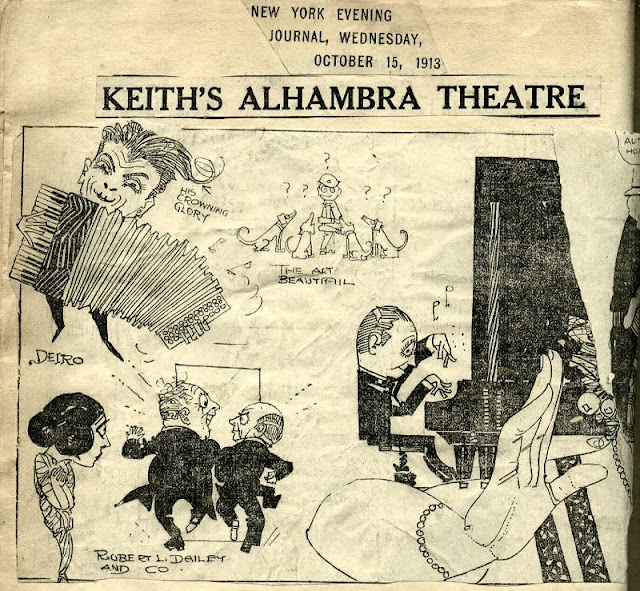 According to his incredibly detailed records, Will Rogers performed here the week of January 25 1914 at the rate of only $350.00.  The Alhambra Theatre began as a vaudeville house called the Harlem Auditorium. The original builders ran into financial trouble and was purchased, finished and renamed Alhambra Theatre by Percy G. Williams, a vaudeville impressario of the late 19th - early 20th centuries.  In 1905, the variety house was sold to the Keith Vaudeville Circuit and named Keith's Alhambra Theatre.  As indicated by the ad above the audience that this theater catered to was white, 125th street was still the dividing line between "White Harlem" and "Black Harlem.  Two months earlier, in late August of 1913, Billy B. Van and the Beaumont Sisters the headliners at the Alhambra for a week. 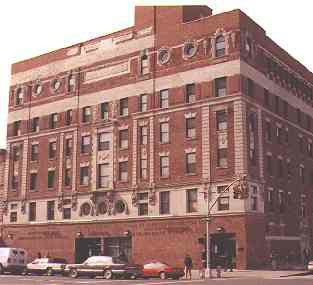 This is the Alhambra today.  It was the premier of Lew Leslie's Blackbirds of 1926, starring Florence Mills and Bill Robinson, that transformed the house into one of the major African American venues of the 1920s. Performers such as Bessie Smith, Jelly Roll Morton, and eventually Billie Holiday, graced the stage and made the Alhambra a success. The premier of the musical Hot Chocolates in 1929, before going to Broadway, really pushed the Alhambra Theatre into the spot light of the Harlem Renaissance.  As what always happens, the depression comes along and these theaters start to slide. The Alhambra switched over from being a live theater venue to a vaudeville / movie house then to just a movie house.  The stage was used sporadically after World War II.  In January of 1950 the New York Times announced a return of vaudeville to the stage of the Alhambra.  The policy did not last.  To promote his new film “The Ladies Man,” Jerry Lewis appeared on stage at 27 R.K.O. theaters in the New York City area over a two day period.  The wonder and genius that is Jerry Lewis appeared at this theater on July 13, 1961 for some incredibly lucky people. On Friday January 26, 1962, the Three Stooges (the 1962 Stooges anyway) began a three day promotional tour for their latest picture, "The Three Stooges Meet Hercules".  It was while shooting this picture that Larry discovered he had diabetes; after an accident on set Larry was rushed to the hospital as a result of falling off a chariot and 250 pound Curly Joe DeRita falling on him and knocking him out.  The doctors said he was ok but found out he had diabetes.  The Stooges were accompanied by popular DJ Clay Cole, who was one of the stars of the double feature with the Stooge picture, " Twist Around the Clock".  The R.K.O. Alhambra no longer appeared in movie listings after a November run of the Taylor - Burton "Cleopatra".  It just sort of disappeared and faded away. 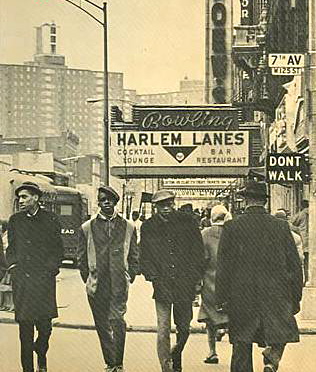