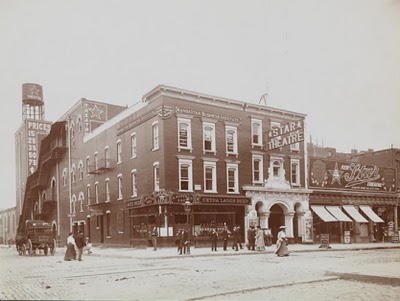 This is The Star Theater on Lexington Avenue between 107th and 108th streets. At almost 2300 seats, it was one of William Fox's earliest ventures.  Developed by a Mr. Henry Jackson, the theater was leased to Fox in 1908.  Built as a vaudeville / movie house the Star Theatre was in competition with the big deluxe houses on 86th street, notably Proctor's 86th. 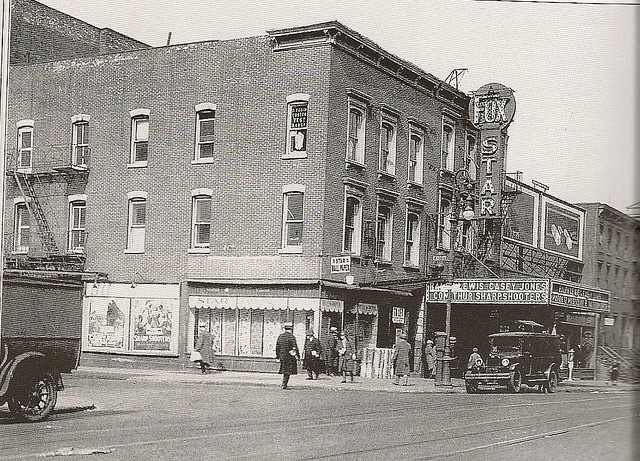 This is obviously during the 1930's. The Star has been reduced to a second run house by this point. Even Lexington Avenue has streetcars (note the tracks). There was a car barn for these trolleys than covered the entire block of 99th to 100th streets from Lexington to Park Avenue.
The theater used existing structures (it appears to be a small commercial building on the corner and a brownstone next to that) as the space for the outer lobby. This set up was not uncommon. The land on the avenue was more expensive than the side street.  On 42nd Street, for example, very often an existing brownstone was used (or the plot of land that the house stood on was used) as the lobby structure. The land on 42nd Street was a good deal more expensive than land on 41rst Street or 43rd Street. Long thin lobbies on 42nd lead to big beautiful theaters built on the cheaper land.  The auditorium was built on the site of a skating rink - or at least that's what is on a map of the area from the late 19th century.
The map also shows a road which no longer existed when the map was published in 1897, the Eastern Post Road, which ran north - south at the western end of the auditorium.
Posted by New York Tours By Gary at 1:19 AM 1 comment: