42nd Street and the theater with 3 names over 80 years. 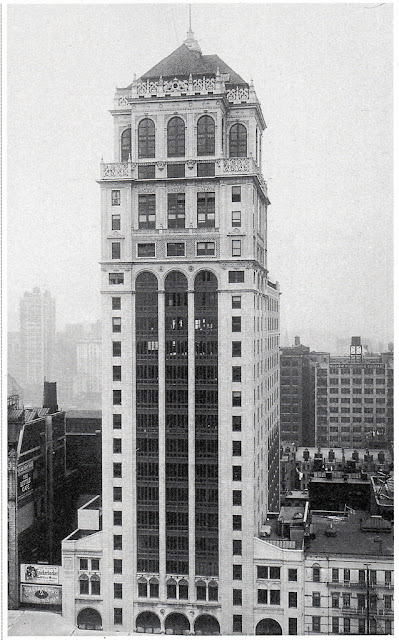 As 42nd Street was becoming the "Avenue I'm taking you to", the center of the theater district that migrated up Broadway since the 18th century, there were those who believed that this street could also be home to business (other than show) development. In this case a speculatively built 24 story white Terra cotta office tower skyscraper that ultimately nodded to the neighborhood by including a theater.  This gleaming white tower was built by the Coca Cola Company and opened in 1913. For a brief period it was the tallest structure in New York north of 24th street (the Metropolitan Life tower in Madison Square was the tallest building in the world from 1909 until 1913 when the Woolworth Building opened). The person behind this plan was Asa Griggs Candler who purchased a failing soft drink company in 1891 for $2300. By 1917 Coca Cola was the world's most recognized trademark. And Candler joined other out of state investors in improving our skyline (the Flatiron Building for example was built by foreign money - all the way from Chicago) by adding his New York office here on "The Deuce".  Not satisfied with his name on the door to the building, he got his name on a marquee. The Candler Theater was designed by, who else, Thomas Lamb. 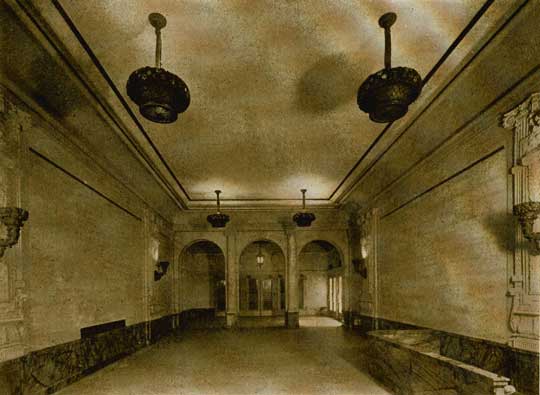 You entered on 42nd street but the theater itself was on 41rst street. This is the same set up for the New Amsterdam which was just to the east and the Liberty Theater which was to the west of the Candler. What this meant was when you went to one of these theaters you had to walk down a long narrow lobby to get to the theater. The main reason for this was that the land was cheaper on 41rst and 43rd streets (because this happened on the north side of 42nd as well) and more theaters could be built if there was a sort of alternation between one theater on 41rst and the next on 42nd. The Eltinge Theater, when it was in it's original location, stood infront of the Liberty Theater's auditorium. Both theaters were entered from 42nd but the Eltinge was really on 42nd. In addition to the land being a cheaper purchase, the taxes on the 41rst and 43rd street parcels, usually the larger structure, would be lower. This fact played a role in determining the future of 42nd street as the grip of the Great Depression took hold. 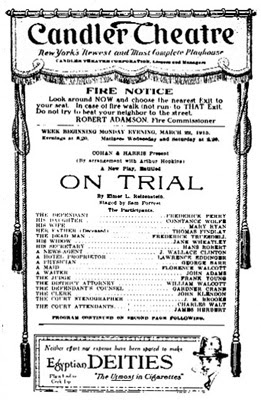 The candler was finished by May of 1914 but the first production to open was on August 19th, 1914 was The Trial by Elmer Rice. Presented by the producing team of Sam H. Harris and George M. Cohan the production ran a respectable 365 performances. 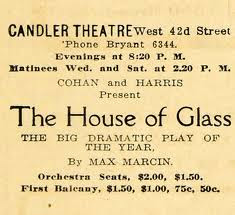 This was the second production in the Candler which ran 245 performances. Look at those prices. What is even more shocking is that people made money with runs lasting 245 performances before the show would go on the road. In 1916 the Candler was renamed the Cohan & Harris Theater. In 1921 Cohan left the partnership and the Cohan & Harris became just the Harris Theater. This was the name of the theater for the rest of it's existence. In 1922, theater history is made with Tyrone Power Sr. as Claudius King of Denmark and John Barrymore as Hamlet in a limited run revival (aren't all Shakespeare productions revivals?). John Barrymore broke the record for playing Hamlet 101 nights in a row, the run was 101 performances. The previous record was set Edwin Booth of only a mere 100 nights in a row. 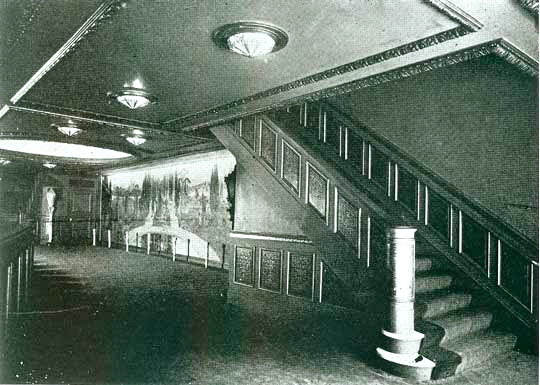 This behind the orchestra section. The ceiling of the 1200 seat house contained an elliptical shallow dome, ringed by Art-Nouveau style chandeliers in a floral theme, not unlike those at the New Amsterdam next door.  With one balcony and boxes on either side of the proscenium arch, the Italian Baroque auditorium included gilded plasterwork around the proscenium and a general color scheme of ivory and gold. Its 25-foot wide marble lobby had 17th Century style wall panels, decorated in floral patterns (floral patterns seemed to have been a theme running throughout the house). Its foyers were decorated with tapestries depicting scenes from Shakespeare. 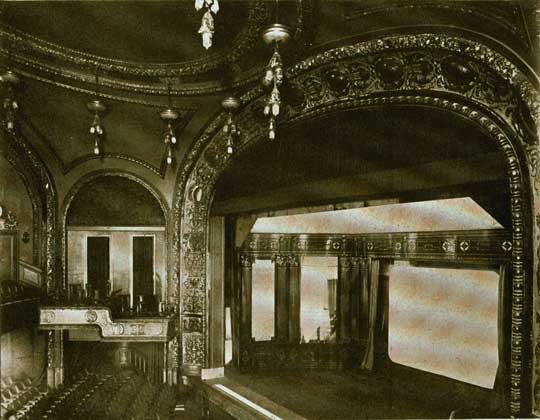 The last live production at the Harris opened January 16th 1933 and ran for 70 performances. Not too good. The play in one act was written and produced by George M. Cohan. When this production moved out in March of 1933, movies moved in for good.  This appears to be what the movie screen set up looked like when the change over happened. The Candler was built with a projection booth so the change over was not so dramatic. Only when movies went wide screen after 1953 was there a need to alter the decor by removing the boxes or other similar "improvements".  So for 61 more years, the Harris remained a 42nd Street triple feature grind house, losing most of its original décor, including the tapestries, the chandeliers, and the side boxes during that time. 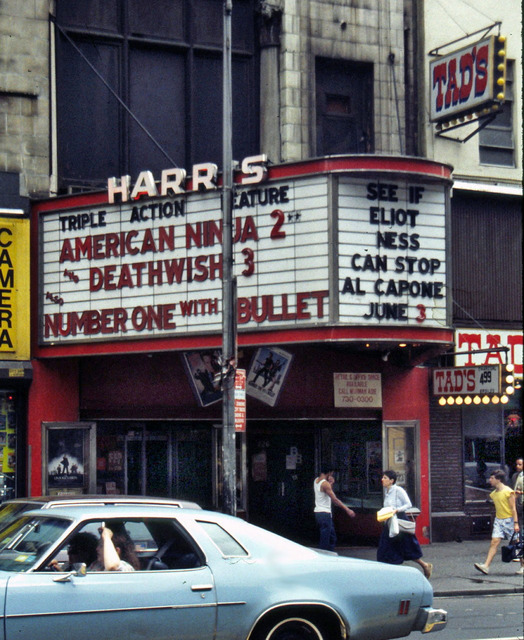 This is how most of us remember the Harris. The theater went dark forever in 1994 although there were hopes that the magic of Disney that took over the severely scarred New Amsterdam would happen here. No such luck as it was demolished in 1996 to make room for Madame Tussaud’s Wax Museum.
Posted by New York Tours By Gary at 3:51 PM No comments: