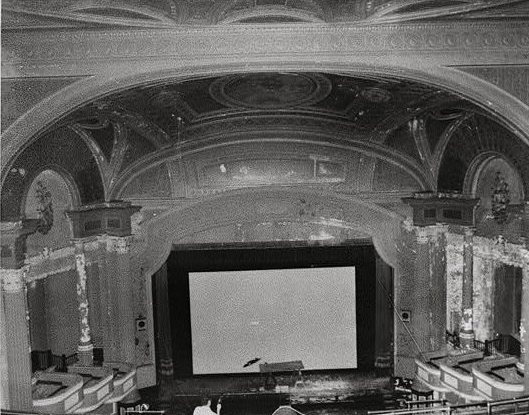 125th street was lined with theaters. Most of these houses where built for live entertainment. This is the Loews Victoria, built for vaudeville and moving pictures. This theater opened in 1917 and it was designed by Thomas Lamb.
West 125th was not only the major commercial strip of the area it was also the border between white and black Harlem. The theaters along 125th catered to a white audience. In the early 20th century one never saw a person of color going into the Alhambra or the Harlem Opera House. 125th street was euphemistically referred to as "The Great White Way", "white" being the operative word. After some time, African Americans were admitted to the balconies. Very Jim Crow southern (not to mention reprehensible and out of step with the very nature of New York) in practice.
Eventually the neighborhood changed. The early 20th century saw some massive construction projects. The original 1904 subway line was being built and that sparked development were there had been not much before.  A large number of speculatively built brownstones and apartment buildings went up all over the Upper West Side and Harlem. In addition to the subway, the late great Pennsylvania Station was under way. The loss of a middle class African American neighborhood that had been displaced by the construction of the old Pennsylvania Station and the blocks close to the subway lines that would open along Lenox Avenue being extensively developed helped turn the tides and shifted the population. Landlords could not fill the apartments or sell off the brownstones.  A forward thinking African American real estate broker convinced the landlords of these big beautiful buildings, buildings that they could not fill as Harlem became over-built to a degree, to rent to African Americans. The landlords needed tenants, the displaced and newly arrived African Americans needed to be tenants. 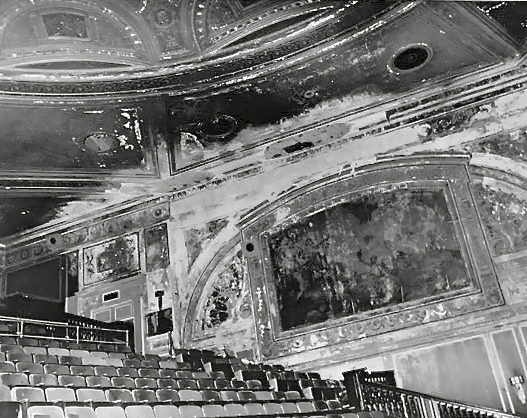 This is the house left wall. These images were probably taken in the early 1990's. The theater was a single screen for most of it's life. In 1972 the house underwent a renovation and began to show first run films. In December of 1972 "Across 110th Street' starring Anthony Quinn and Yaphet Kotto opened at the Victoria. Other similar pictures followed. In 1977 the Death of Loews Victoria was reported in The Amsterdam News. Loews could no longer operate the Victoria profitably and put it up for sale. After a multi-million dollar plan to restore the Victoria fell apart in 1988, it was not until 1992 that the Victoria was used again.
Retired New York City police detective, and owner of the landmarked James Bailey house on Saint Nicholas Place, Warren Blake took over and after another "face lift" reopened the Victoria as The Harlem 5. Mr. Blake, sensitive to the historical and irreplaceable aspects of this theater, had partitions put in to create 5 auditoriums that would leave no scars and could be easily removed. 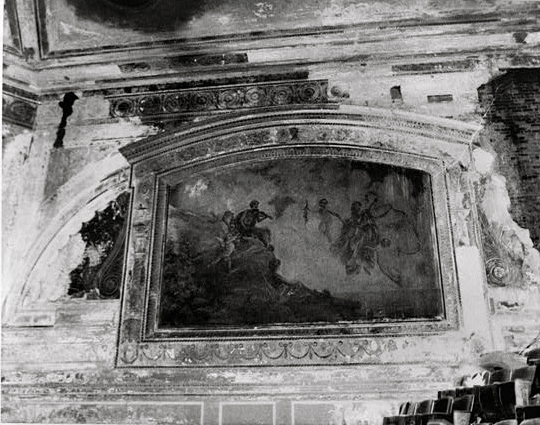 Detail of the house right mural. The white sections are areas where there is water damage. 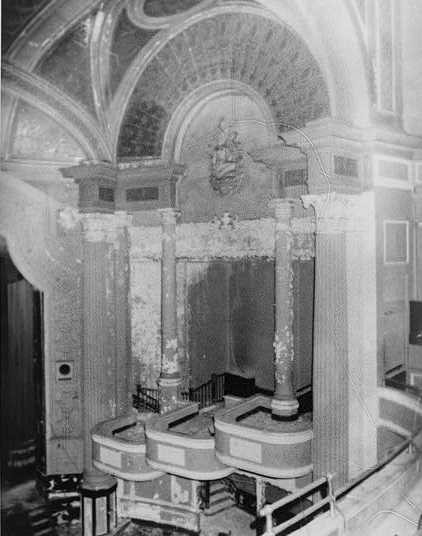 The house right boxes. The Victoria was built with, in addition to vaudeville, motion pictures in mind so the boxes were designed to not interfere with the image on the screen. When wide screen pictures became the norm, the stage was wide enough to accommodate a wider screen. The situation was the same at Loew's 83rd, the boxes remained until the theater was turned into a "quad" ; then they were in the way and had to go. 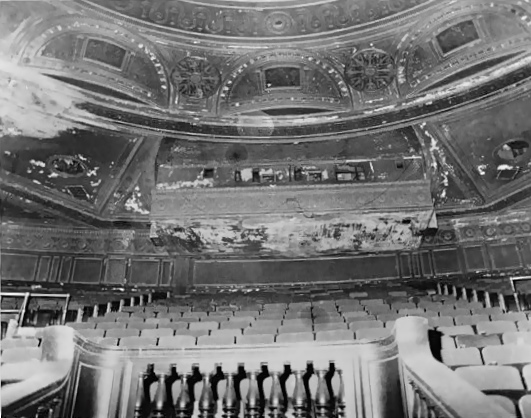 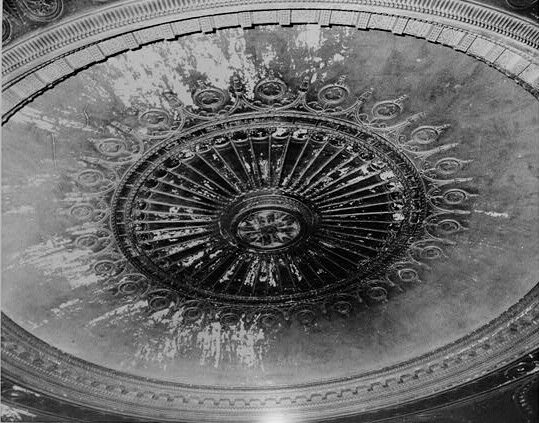 This is the dome over the auditorium of the Loew's Victoria. It is missing it's chandelier but it could have been removed much before this picture was taken. In 1972, a benefit performance was held at he newly refurbished Victoria for the Dance Theater of Harlem. In a New York Times article about this star studded celeb-filled, sold out event called "They Came To Harlem in Ermine And Pearls And Jeans" there is a reference to the chandelier lowered slightly to give the theater a more intimate feeling. The Victoria remained in the hands of Loew's until 1977. 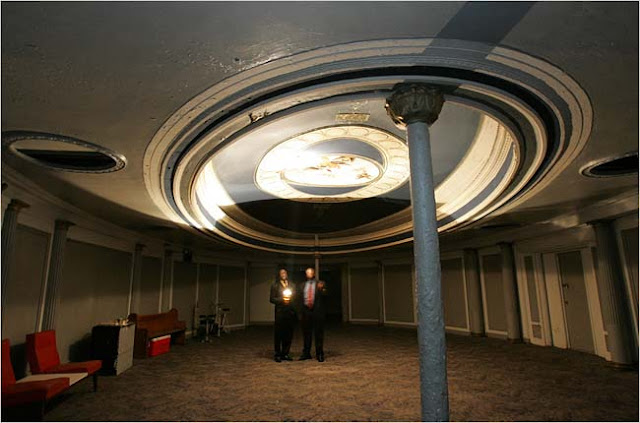 This is a very recent photo of the inner lobby (the same space as the picture below. The marble floor is being preserved with a covering of carpet. Warren Blake was the man who did the last renovation on this space and he was sensitive to historic preservation. In the ceiling, on the left and right sides of the center dome, there are decorative panels, probably stain glass panels covering the recessed lighting fixtures that appear ever so faintly in the previous picture but are missing here. I am hoping that Mr. Blake removed them, along with the auditorium chandelier and put them somewhere safe. I vividly remember round stain glass panels used extensively in Thomas Lamb's Loew's 83rd, particularly under the balcony overhang in the orchestra section, casting a subtle amber glow during the Movie.
In the picture is New York State Assembly Member Keith Wright. There has been much talk over the past few years about what to do with the Victoria. There was an attempt to include the Victoria in the renovation of the Apollo. There have been rumblings of a high rise hotel going up on the site that would include, depending on which version one hears and believes, different things. In one scheme, the entire auditorium would be saved and the space turned over to one of a cornucopia of non-profit arts group in return for tax breaks and zoning rules waved. In another plan, part of the theater would be saved and used as part of the lobby of the new hotel (this would also include saving the facade). The last and worst idea is just to save the facade and incorporate it into the new structure. 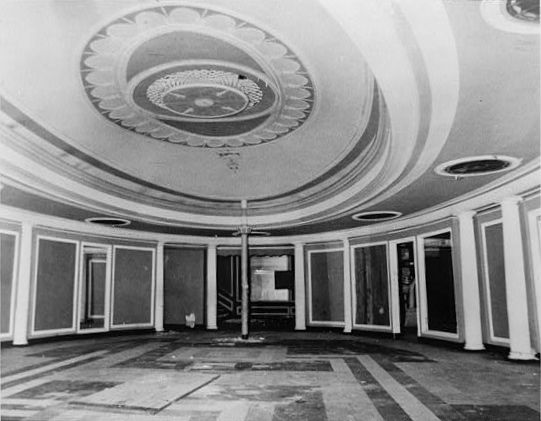 This is the lobby earlier than the above picture. 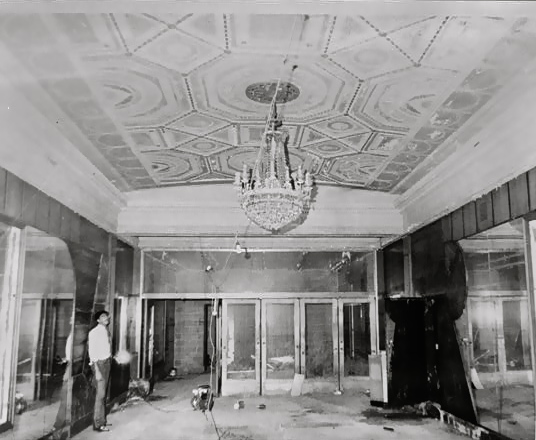 The outer lobby with it's chandelier still there but not working. Harlem has seen a great deal of redevelopment over the past few years. However nice it is to have a Marshall's, Staples, an H & M and an Old Navy very close by, one must evaluate the cost. The price Harlem has paid is the loss of some historically important buildings, a loss to not only theater history but African American history as well. Always remember that "we will not be judged by what we have built, but by what we have destroyed". 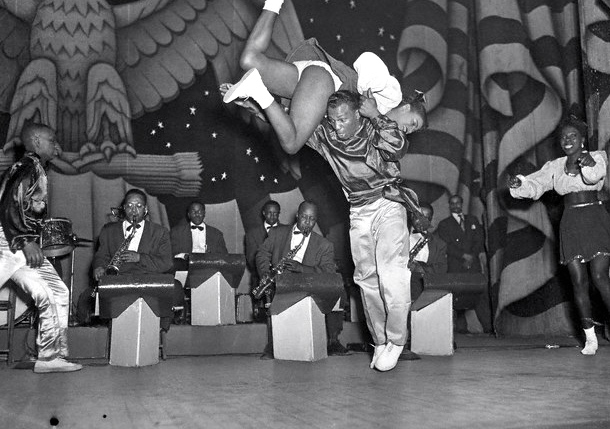 I found this picture while looking for more interior photos of the Victoria. The caption of this undated photo stated that this was at the Victoria, a Jitterbug performance. Given the eagle and flags in the background I would guess World War Two era.
Posted by New York Tours By Gary at 11:54 AM 5 comments: