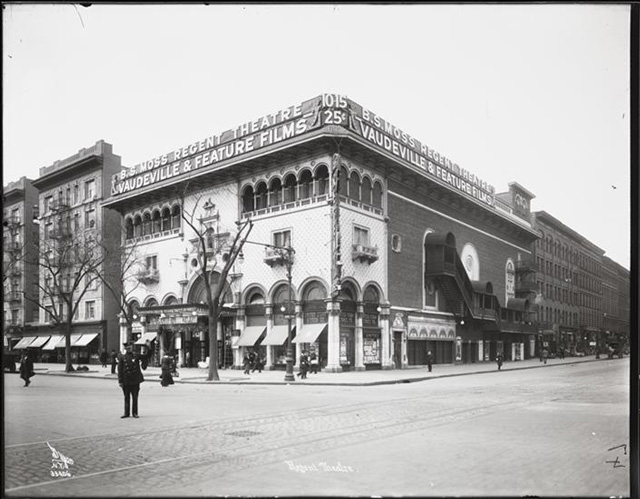 This was the Regent Theater.  It is (notice I am saying "is") on 116th street where 7th avenue is crossed over by Saint Nicholas Avenue. When the theater was built in late 1912, opening in 1913, the area was predominately a German Jewish enclave. Being that they were well to do, successful Western European types, they deserved a luxurious neighborhood theater. Notice the friendly policeman waving at the camera.  The Regent was designed by, you guessed it, Thomas Lamb. It is his first motion picture specific house. There was a stage built with the house just in case movies did not work out. The exterior was designed to look like the Doge's Palace in Venice.  The Regent sat 1800 in a Spanish Baroque setting, with tones of red, gold, blue and a mural over the proscenium depicting “The Surrender of Granada”.
Built by Biograph Studio founder Henry Marvin, the theater was designed to make movies respectable. A luxurious theater with a large orchestra, large theater organ, ushers in fancy uniforms and programs should have attracted the crowds. The place was initially a failure. How could such a beautiful theater fail? I don't know either but Mr. Marvin hired Samuel "Roxy" Rothafel to work his magic, successfully combining vaudeville with movies.  Roxy also moved the projection booth down to the orchestra level.  He put the musicians on the stage in a setting surrounding the screen reminiscent of a baroque Spanish courtyard.  However in this picture the orchestra is still in the pit and what appears to be the fire curtain is down. This picture might have been taken just before opening by the architect's firm as a record of their work.
The theater became a success and was so for the next 5 decades, one of the more important movie theaters in Harlem. 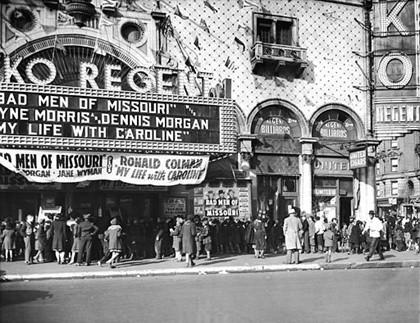 This photo was taken in 1941, the double feature playing at the RKO Regent are from that year. "My Life With Caroline" starring Ronald Coleman is a RKO picture, "Bad Men of Missouri" starring the still sort of newlywed Mrs. Ronald Reagan (Jane Wyman) is a Warner Brother picture. I am guessing that the Regent was not a first run house at this point.
In the first picture of the Regent I put up there is a banner at the top of the building announcing that the "B.S. Moss Regent Theatre" is in the business of presenting "Vaudeville & Feature Films". B.S. Moss was eventually taken over by RKO. The vaudeville acts were Keith-Albee acts. Even after RKO took over, Keith-Albee continued to supply the acts, the "K" in "RKO" stood for "Keith" as in "Keith-Albee". RKO was born out of an unholy alliance between RCA and Keith-Orpheum (Orpheum was the west coast equivalent of the east coast Keith-Albee - the two companies merged and the new name was Keith-Orpheum). This alliance was orchestrated by Joesph Kennedy (JFK's father) who wanted a studio for his girlfriend Gloria Swanson. What is even scarier is that Keith-Orpheum possessed, once the merger happened in 1928, over one million seats in their combined motion picture and vaudeville houses. You are looking at the facade of 1800 out of that million. 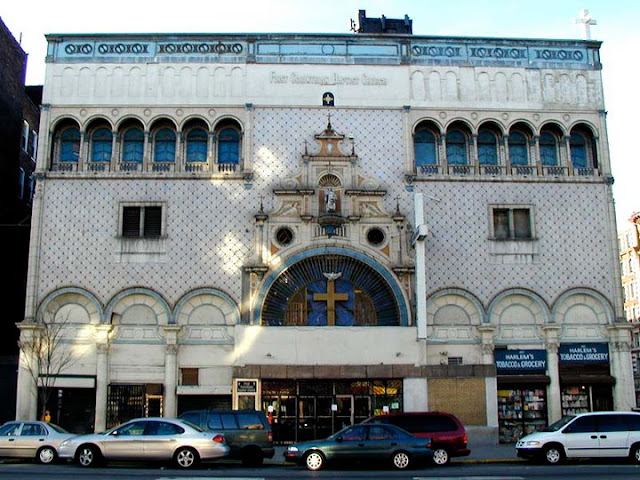 This is the Regent now, but it is called The First Corinthian Baptist Church. It is a New York City Landmark and cannot be altered. There had been "modernizations" done during the '40's and '50's when RKO owned the theater. Nothing too terrible. The satin wall panels that once adorned the theater had been removed and painted over. 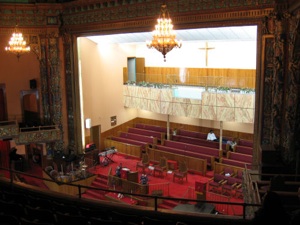 The interior today. Well, the boxes are still intact.
Posted by New York Tours By Gary at 9:11 PM No comments: