The Watt's House on 139th Street 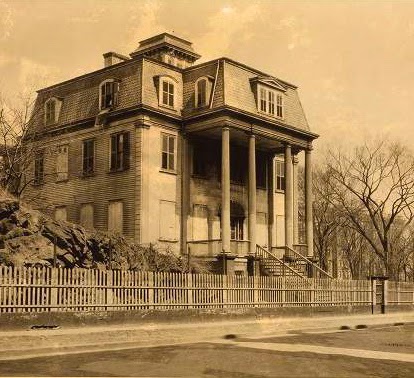 This looks like small town anywhere U.S.A.  Once upon a time, a good deal of Manhattan could pass for a place where you could expect Andy Hardy to come bouncing down the streets.  Good thing there are some records of Manhattan's bucolic past.
This is called, in the caption of the photo, the "old Watts Mansion".  It once stood on West 139th Street just east of 7th Avenue. The picture was taken in 1915, long after the neighborhood had changed from an area known for it's Victorian Gentility to a "convenient residential suburb".  Once the 9th Avenue El snaked it's way up 9th Avenue then over to 8th Avenue and past 139th street (there were stations at 129th and 145th street) the vestiges of the country life began to disappear.  The neighborhood in a sense under went  three evolutions.  From rural to Victorian Gentility to Suburban to Urban, each resulting in it's own style and denser population. 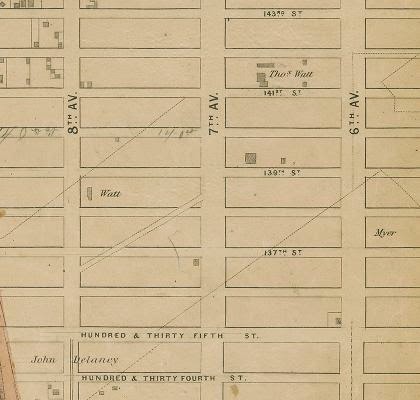 This is the map from 1868 and clearly there is something just east of the corner of 139th street and 7th Avenue.  The name "Watt" appears next to a structure closer to 8th Avenue. 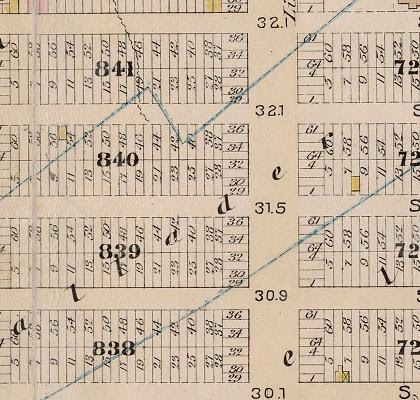 The house is there in 1885 and the name across the property, whose property lines are the same from the 1868 map, has the name Cadwallader across it.  That is the name of the family that had owned the land back even before the revolution.  The patriarch of the family Colden Cadwallader, a former Colonial Governor of the New York Provence and avid scientist / botanist.  Although he did have a friendly relationship with Benjamin Franklin, he was on the wrong side of the Revolution.
His grandson  Colden D. Cadwallader made up for his grandfathers leanings by becoming a colonel of volunteers in the war 0f 1812.  He was eventually appointed Mayor of New York City by Governor DeWitt Clinton in 1818.  A staunch supporter of a national canal system and a major abolitionist, Colden D. died in Jersey City in 1834.  His remains were moved to Trinity Cemetery in 1845 to a prominent spot in the cemetery's east side so his grave could overlook the then rural intersection of the Bloomingdale Road at West 153rd Street. By 1869, preparations to widen the Bloomingdale Road into the new Broadway, Colden had to be moved again to another plot when the new road cut through the cemetery,  this time to an inconspicuous plot in the cemetery's west side. This is the 1897 map and there has been a good deal of development. In 1891 David H.King Jr. created 4 rows of row houses that will one day be a large piece of the Saint Nicholas Historic District.  After buying the land from the Watt estate,  King commissions 4 of New York's star architecture firms Clarance Luce, Bruce Price, James Brown Lord and McKim Mead & White.  The Watt family must have been putting land together to form a larger estate once upon a time.  This map indicates conveyances of ownership, with out the dates but with the names of the former owner.  "C.D. Colden to 'A. Watt'".  The Saint Nicholas Historic District landmarking report states that the King had purchased the land from W. A. Watt. 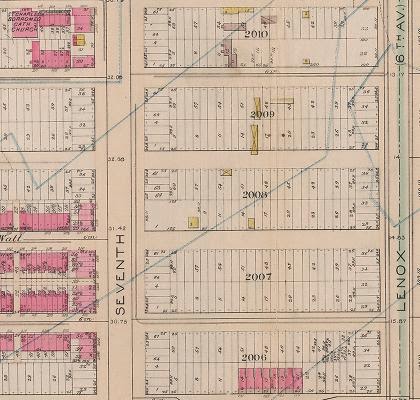 There is the house on the 1897 map and the Watt House stands alone.  The old Watt house survived maybe due to the fact it was east of 7th Avenue but probably the large outcropping of rock that once rose up between the corner and the house as seen in the top picture had something to do with it. 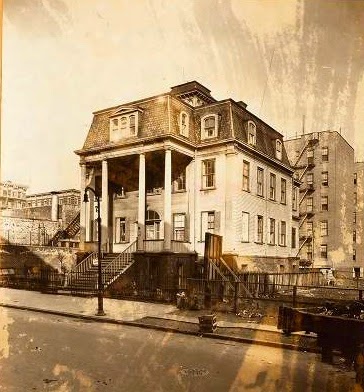 This view is from 1925 and we are looking north west. The apartment building in the left background was built on the vacant lot (see the 1897 maps) at the south west corner of 140th and 7th Avenue.  I am guessing that the house, not long for this world (is there a demolished house heaven?) is being used as a multiple unit dwelling as there is what appears to be an emergency escape staircase on the left side of the house.  Tenements are now filling the lots on 141rst street and in the center of this picture there is a sign in the vacant lot east of the house. What is being heralded? Perhaps the forthcoming apartment building soon to rise on the lot that will also absorb the old Watt Mansion.  As one era begins, another must end.